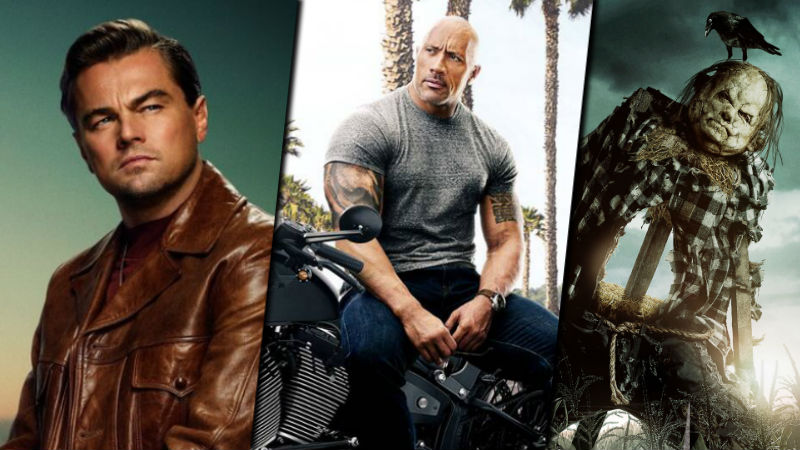 As we roll around into the depths of 2019, we get some big movie releases this August. From the explosive return of The Rock to the big-screen, to a smaller fright-filled horror, we’ve rounded up the most anticipated films coming your way this month.

The first Fast & the Furious spin-off sees Dwayne Johnson and Jason Statham’s characters of Hobbs and Shaw having to team-up to take down a notorious criminal (Idris Elba) who has developed some superhuman-like abilities. Between the banter, car chases, one-liners, and big set-pieces, you know what to expect here (it is a Fast & Furious movie, after all), but we can’t help but to love the bro-down chemistry between Johnson and Statham.

Scary Stores to Tell in the Dark

Produced by Guillermo del Toro (Hellboy, Pan’s Labyrinth), Scary Stores to Tell in the Dark is the movie adaptation of Alvin Schwartz’s wonderfully grotesque 1990s children’s anthology books famous for haunting nightmares for decades. The film follows a group of children in the late 1960s living in small-town Mill Valley, who stumble upon a book which writes to life the darkest fears of those who read it. As you can imagine, chaos ensues.

The Art of Racing in the Rain

If you’re up for some dog-shaped tears this month, Milo Ventimiglia (This is Us) and a furry friend star in this heartfelt story based on the best-selling novel of the same name by Garth Stein. In the movie, Ventimiglia plays Denny Swift, an aspiring Formula One race car driver, who happens upon a perfect puppy named Enzo. Denny and Enzo quickly become best friends, helping each other down the curving road of life and teaching each other about what matters most. Enzo, voiced by Kevin Costner, shows amazing insight into the human condition through out the film.

The duo of Gerard Butler and Morgan Freeman of this admittedly over-the-top but highly-enjoyable franchise seems to have enough momentum to warrant a third film, and we’re readying our popcorn for the overindulgent explosion-fest that is Angel Has Fallen. In this entry, loyal presidential bodyguard  Agent Mike Banning (Butler) is framed for an assassination attempt on the man he’s sworn to protect, he must escape his own agency and outsmart the FBI to clear his name.

Produced by Seth Rogan and Evan Goldberg, Good Boys is essentially the Superbad for a new generation. After being invited to his first kissing party, 12-year-old Max is panicking because he doesn’t know how to kiss. Eager for some pointers, Max and his best friends, Thor and Lucas, decide to use Max’s dad’s drone — which Max isn’t allowed to touch — to spy on a teenage couple making out next door. Things go awry, and boyhood chaos ensures.

Once Upon a Time in Hollywood

There’s been a lot of buzz around Quentin Tarantino’s latest film, which stars Leonardo DiCaprio, Brad Pitt, Margot Robbie, and a host of other A-listers. The story is a deep-dive into the world of Hollywood during the 1960s with the Manson Murders as a backdrop, following Rick Dalton, former star of a western TV series, and his longtime stunt double Cliff Booth, who are both struggling to make it in a Hollywood they don’t recognise anymore.

Which of May’s movies catches your interest the most? All the options are great – but we’re most keen to see The Rock and The Statham throw down in Hobbs & Shaw. Let us know what you’re looking forward to! Let us know by tweeting @MenStuffZA, posting on our Facebook page, or commenting below.

Best Trailers of the Month: The Witcher, Zombieland 2 & More