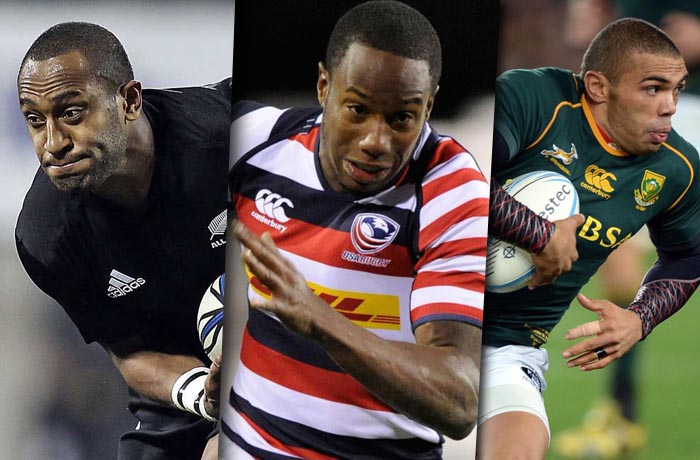 Who is the fastest player on Earth? We break it down to see which speedy star is ahead of the pack.

Who is the world’s fastest rugby player? It’s a topic often discussed throughout the rugby community, and given the rise or some new stars, its interesting to look at who tops who on the rugby field.

Since he burst onto the Sevens scene, reports have suggested that USA player Carlin Isles is the fastest player currently playing professional rugby, however, sprinter-turned-sevens player Trae Williams has the best 100m of any professional rugby player today.

The following times are the best recorded times for the 100m for each respective player:

The former All Black, Blues, and Munster speedster was considered the quickest around during his time in Super Rugby. Howlett clocked a 10.68 in his prime, and showed his pace by scoring a number of long range tries throughout his international and Super Rugby career.

The England Sevens star is undoubtedly one of the fastest rugby players in the world, not just in sevens, but in the 15-man game too. Norton’s 100m time is unknown, but he did a time of 4.78 for the 40m, which is incredibly fast, and just behind Rokocoko’s 4.66 seconds. Norton definitely hits his top speed in the 60-70m mark, and should fit comfortably into any “world’s fastest players” list.

Smokin’ Joe Rokocoko didn’t earn his nickname for nothing, as the Fijian-born All Black winger left defences scratching their heads throughout his time with the All Blacks and Blues. The winger ran a 10.66 in his prime – a great time for a man of his size and stature. He’s still tearing it up with Racing Metro in France, and hasn’t seem to have lost much of his pace.

Seabelo Senatla’s acceleration has to be one of the most explosive in world rugby at the moment. The 27-year-old Commonwealth gold medal winner is able to hit full speed from a standing start in a blink, and if his all-out pace wasn’t troublesome enough for defenders, the Stormers and Blitzbokke star has some dazzling footwork that can bamboozle the best tacklers in the game.

According to reports, the USA’s new speedy find is said to clock in at 10.58 seconds on the 100m dash, slotting him into the top 6 rugby speedsters in recent times. Since debuting in the Gold Coast leg of the Sevens World Series back in 2014, Baker’s languidly-smooth, yet blisteringly-quick, pace has allowed him to cross the whitewash 170 times in the World Series, in an attack that goes someway to proving that speed is an ultimate leveller when it comes to scoring tries.

Takudzwa Ngwenya sprinted into the limelight with a scintillating try in the 2007 World Cup, where he used his fancy footwork and sheer acceleration to outstrip Bryan Habana in the pool match-up between the Springboks and the USA. When Ngwenya put his head down on the 100m dash, he managed a time of 10.5.

Bryan Habana made his Springbok debut in 2004 and managed to score a try with his first touch of the ball. Since then the winger became a prolific try scorer, showing blistering pace for the Springboks, Bulls, Stormers and French powerhouse Toulon. Habana’s best 100m time is captured at 10.4 seconds.

While Caucau’s career may have had its ups and downs, one thing that remained constant was the Fijian flyer’s undisputed speed. The big winger had a deceiving turn of pace for his size, and incredible handling and side-stepping skills to match. There’s no official time logged for the speedster, but its speculated that he would be in the sub 10.4 region in his prime.

The Zimbabwean speedster hit the scene scoring six tries on his debut for the Springboks against Uruguay in 2005. Chavanga may have not had the physical bulk to match some players, but he could leave any other world winger in his wake. Chavanga managed a 10.27 in the 100m dash, which made him, at the time, the fastest rugby player in the world.

Carlin Isles is well-known as the fastest man in rugby, and has showcased exactly why for a number of years on the World Sevens Circuit; however, he may not be the quickest from end-to-end. Isles was a former track athlete turned rugby player, so its inevitable that he would have an impressive 100m. 10.13 is the time the 27-year old produced, giving him the top spot in the world’s fastest players.

While most of the above players are rugby stars who would make great sprinters, Australian Trae Williams is a sprinter who has turned to rugby. While still new on the scene, Williams has made his debut for the Australian Sevens side at the Dubai Sevens in 2019, and has earned the nickname ‘Quadzilla’ due to his shocking leg girth. In 2018, Williams clocked in a time of 10.1 in the 100m of the Australian Athletics Championship, making him (technically), the fastest rugby player today.

Someone should just show Habana this vid to inspire him for Sat.

Show him the Isles video or the Habana of old?

I miss the Habana of old.

Isles and Baker are heat.

It is important to distinguish between rugby players that “made” it in both codes (15’s and 7’s). Carlon Isles was a one trick pony that, despite his speed don’t even make the US 7’s squad any more.

Fast 100m times do not always translate to speed on the rugby field, especially the 15 man code. Neither Baker nor Isles would have made it in 15 man rugby.

Jaco Reinach 10.3, he is the father of Cobus Reinach