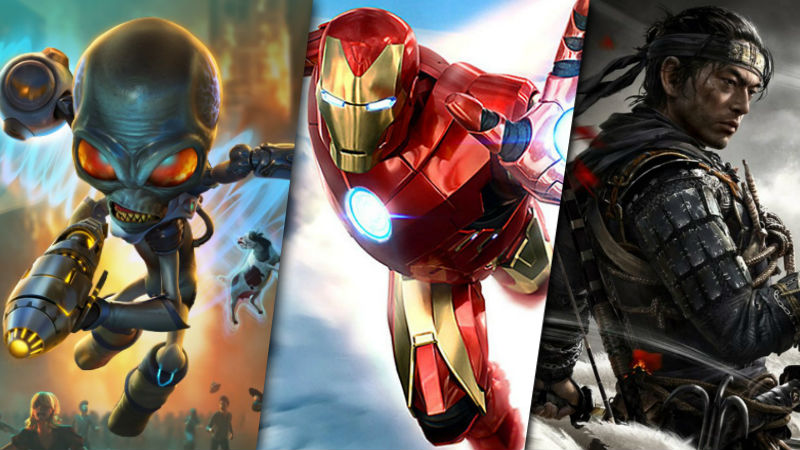 Which games should you keep your eyes out for this month?

The gaming release calendar is beginning to heat up with some exciting titles on the cards, along with some rejuvenated franchises making a return, in one form or another. Check out our picks for the biggest games hitting consoles and PCs in July 2020:

If you’ve ever wanted to be Iron Man, this is the closest you’ll get to it (that is, until we build our own Iron Man suit). Iron Man VR is essentially a no-brainer for a virtual reality game, allowing you to take control of the armoured Avenger and use his weapons and abilities to fight off some concerning threats, save civilians from burning planes, and customise your armour in Tony Stark’s garage. Furthermore, Iron Man VR is aiming to be more than a VR tech demo, and includes a full campaign with an all-new story featuring other Marvel characters, such as Pepper Potts, Nick Fury, and Friday, among others.

After its PS4 release late last year, Death Stranding makes its way to PC, delivering one of the more bizarre and divisive games in recent times to mouse-and-keyboard players. Coming from the mind of Metal Gear Solid’s Hideo Kojima, Death Stranding is an admittedly strange, sci-fi open-world game starring Norman Reedus as Sam, a post-apocalyptic postman of sorts, as he has to traverse across the United States by foot. As we said in our review of the PS4 version: “Death Stranding is an incredibly interesting and unique experience, offering gamers something new and adding challenging mechanics to menial tasks that we usually take for granted in other games. However, its laborious story and lack of ‘wow’ moments keep it from being a game that should be recommended to everyone.”

Coming from the makers of the inFamous and Sly Cooper series, Ghost of Tsushima is an open world adventure game set in Feudal Japan where you take on the role of a samurai. Gameplay-wise, there’s a lot similar to the likes of Assassin’s Creed – clearing out camps and hunting down dangerous enemies in stealth or full-blown combat – but of course, it has its own Japanese-inspired flair. You’ll tasked with battling overwhelming odds against the incoming Mongol Empire using your katana, samurai skills, and honour in order to protect your homeland.

Super Mario’s Paper Mario spin-off series takes the beloved formula of the main franchise, and puts an RPG spin on it. The release is the first game in the series since 2016’s Paper Mario: Colour Splash, and will shake things up even further when it comes to combat. Battles take place in a ring, allowing you to move more freely and interact with the environment, while blending the traditional turn-based combat with puzzle-solving by turning the dial on the ring.

While skateboarding fans aren’t getting the beloved Skate 4 just yet, we are getting a spiritual sequel of sorts in the form of Skater XL. Highly-influenced by EA’s more realistic franchise, Skater XL utilises control of the movement through the thumbsticks. Each thumbstick is connected to the corresponding foot of the skater and as the player moves the stick, the board instantly responds. Much like a musical instrument, the player has complete freedom, whether it be pushing to nail a line or skating free form.

Essentially a Honey, I Shrunk the Kids video game, Grounded pits you as a shrunken hero who isn’t tasked with a globe-spanning mission, but rather learning to survive, adapt, and fight your way through a run-of-the-mill backyard. The game looks like a lot of fun, and allows you to explore the open-world, find tools and resources to build fortifications, and take on ants and other insects, which are now the size of horses. It also has online co-op and campaign to play through.

Another remake arrives this July with the cult-classic, Destroy All Humans, makings its return. The game essentially allows you to terrorise the people of 1950s Earth as the evil alien Crypto-137. Harvest DNA and bring down the US government, annihilate puny humans using an assortment of hilarious alien weaponry and psychic abilities, and reduce their cities to rubble with your flying saucer.