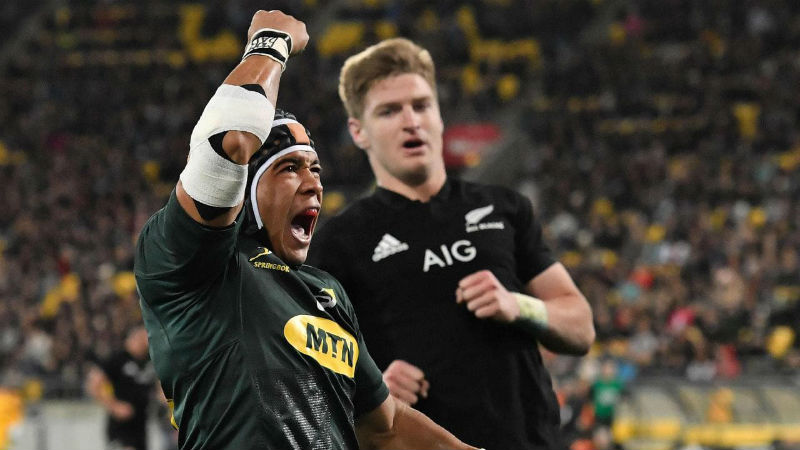 Last year’s epic win by 36-34 was the Springboks’ first-ever victory over the All Blacks at Wellington’s Wespac Stadium – the venue where the South Africans lost their RWC quarter-final against Australia in 2011. Check out all the stats and facts here.

The last Test match for the All Blacks at this stadium was last year on 15 September against South Africa, when the Springboks were victorious for the first time since Westpac Stadium opened in January, 2000.

It was an unforgettable day for South Africa, but for the All Blacks it must have been one of their darkest days on the rugby field in their proud rugby history.

Firstly, no All Black team has conceded 36 points against any team on home soil since their first Test match in 1903. It was also their first loss against the Springboks in seven matches at the Westpac Stadium. The five tries conceded is also a record against South Africa at this venue.

Aphiwe Dyantyi’s two tries in this match was the first double against the All Blacks in New Zealand since Ray Mortdt’s hat-trick at Eden Park in Auckland in 1981.

– Most points: 36 – 15 September 2018 (the 36 points conceded by New Zealand were their most ever against any opponent on home soil)

– Most penalty goals: 1 – On five occasions

– Most penalty goals: 1 – By five players

Springbok records against all opponents at Westpac Stadium:

– Most drop goals: 1 on three occasions

– The total test caps for the Springbok starting line-up is 457. There are 168 caps in the backline with 289 caps amongst the forwards. On the bench there are a further 350 caps.

– The average number of caps per player in the backline are 24, the forwards 36 while the players on the bench average 44 caps. The average age of the starting fifteen is 27.

– Tendai Mtawarira is the second most capped Springbok in the Castle Lager Rugby Championship with 51 appearances. Bryan Habana holds the records with 53 appearances.

– Should a successful drop goal be kicked by a Springbok in this Test match, it will be the 30th drop goal against New Zealand in the history of Test match rugby between the two countries.

– The referee is Nic Berry of Australia and this will be his 10th Test match as a referee, but his first involving South Africa.

– The assistant referees are Angus Gardner of Australia and Shuhei Kubo of Japan, while Rowan Kitt (England) is the TMO.

The match kicks off at 09:35 on Saturday. What’s your predictions for the game? Let us know below or on Facebook or Twitter!