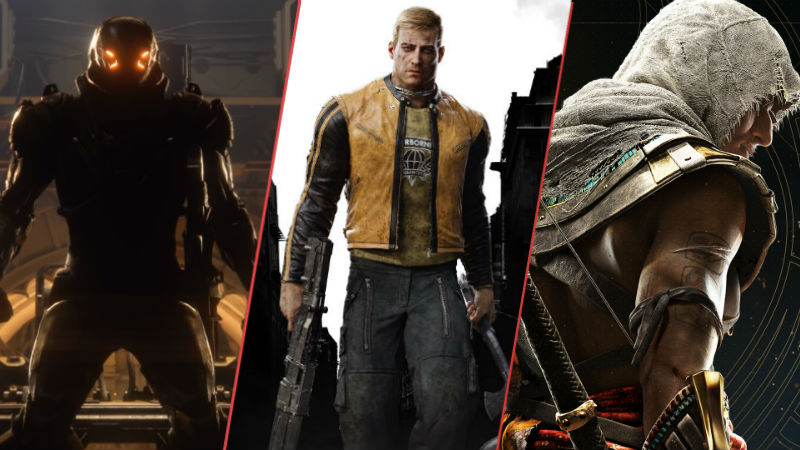 E3 has been jam-packed full of huge game announcements, sneaky reveals, and surprising revelations. There’s no doubt that gamers are in for a treat with what lies ahead over the course of the next year or so, but looking back at the unveilings, we take a look at the biggest and best announcements from this year’s show.

Electronic Arts kicked off their presentation with a new game from Mass Effect developers Bioware called Anthem. The game looks like the love-child of Iron Man and Crysis, with a dose of Mass Effect peppered in there. You play as a Freelancer, equipped with a weapon and jetpack exosuit known as a Javelin, and are tasked with braving the lush yet hostile open-world around a walled city to protect mankind from the threats that lie beyond. Anthem also features cooperative multiplayer, so you’ll be able to team up in groups of up to four to complete missions together, though we expect you’ll also be able to play most of the game on your own if you prefer.

Monster Hunter World is one of the most surprising and intriguing announcements yet to come out of E3 2017 for anyone familiar with the series. The Japanese creature-killer franchise has amassed a huge following on Nintendo’s platforms, but with the series making a jump to the Xbox One, PS4, and PC, it’s a huge step to showcasing the brilliance of the franchise to more mainstream gamers. Open world exploration, loot grinding, co-op monster hunting, bigger swords, and even bigger monsters – Monster Hunter World is looking to be a huge hit when it releases in early 2018.

EA’s A Way Out looks to be one of the more unique game announcements to come out of E3. Diverging from the usual onslaught of shooters, racing, and action games, A Way Out is a co-op narrative game that puts players in the shoes of two convicts on the run. The game is being made by an indie studio who brought us Brothers: A Tale of Two Sons, a somewhat underrated adventure title. There aren’t too many details on the game, but one interesting point is that A Way Out is only playable in cooperative mode, either through couch co-op or online multiplayer — two players must always play as protagonists Vincent and Leo throughout a session. The coordination makes for some intricate co-op experiences, including using one another’s weight to shimmy up walls or help one another over obstacles.

Bethesda have hopes of giving us new nightmares this year, as they announced The Evil Within 2, a sequel to 2014’s brilliant survival horror revival from the mind of Resident Evil creator Shinji Mikami. The Evil Within 2 picks up after the events of the first game, where no one believes the horrors that Detective Sebastian Castellanos experienced. But when Castellanos is given a chance to save his daughter, he must descend once more into the nightmarish world of STEM. Expect lots of eerie corridors, grotesque monsters and walls that don’t act like walls.

The excellent Wolfenstein II: The New Order was one of the best first-person shooters of 2014, and it’s getting a sequel. Wolfenstein: The New Colossus kicks off with a full scale Nazi occupation of the United States, and of course, it’s up to BJ Blazkowicz to murder them all with a variety of classic and science-fiction weapons and machines. From the initial trailer, The New Colossus is already looking incredibly slick and brutal, and we can’t wait to get our hands on some more alternate-timeline Nazi stomping.

The Metro series went quiet since the sequel came out back in 2013, but the third game in the franchise is on its way. Rather than scurrying around in linear underground tunnels through post-apocalyptic Moscow, Metro Exodus takes the series to an open-world setting, being described as the “most ambitious project yet”, which will see players venture across a monster-filled Russia. The reveal trailer showed off a dilapidated setting, makeshift weaponry and giant mutated rat and bear creatures — all elements that will be familiar to fans of the previous two games in the series.

Assassin’s Creed: Origins was teased ahead of E3, but we knew very little details. The full reveal came at E3, showcasing the next instalment in the fan-loved series, which takes players back to the origins of the Assassins Brotherhood (hence the name). Set in ancient Egypt with a new (and possibly first) assassin protagonist named Bayek, the game features vast open deserts, deadly swamps and period weapons, along with a whole bunch of new features, such as the ability to light arrows on fire and use your eagle companion to tag enemies and scout the landscape. It looks to be more of what we’ve come to love from the franchise, but with a distinctively different setting that’s been needed in AC games.

What game are you most excited for? Let us know by tweeting @MenStuffZA and commenting below.

All the Biggest E3 Trailers & Reveals You May Have Missed

Sniper: Ghost Warrior 3 Review — A Successful Shot in the Dark?

7 Awesome Games You Can Buy for Under R200

Xbox One Consoles on Special in SA this Weekend