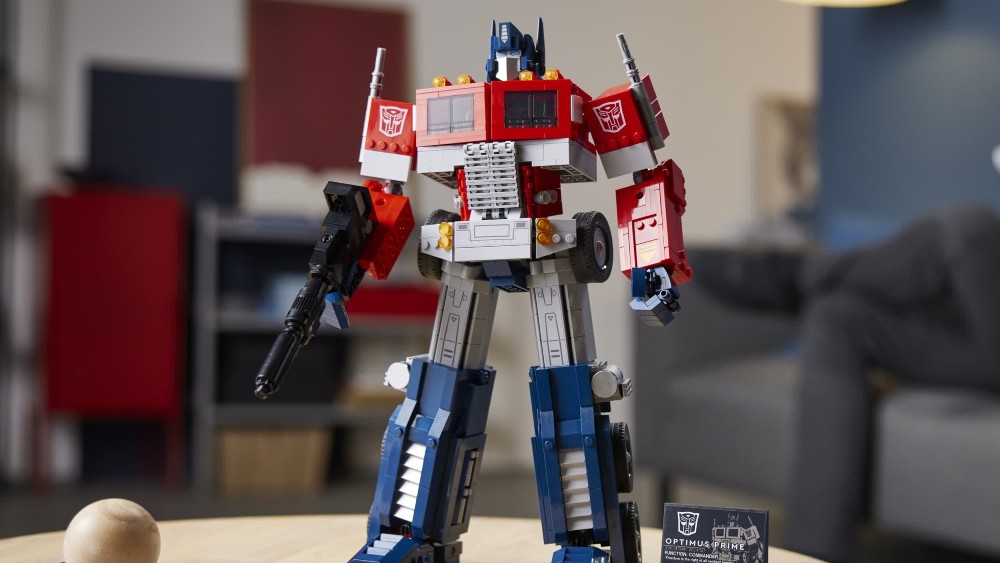 In arguably the best collaboration of all time, Lego has partnered up with Hasbro to deliver a special Transformers set, giving you the power to build your own form-changing Optimus Prime.

Inspired by the Generation 1 look and appearance of the mighty Autobot leader, this new set includes over 1,500 pieces that, once built, can convert from a robot to a truck and back again, just like in the TV show, comics, and subsequent movies.

The model features 19 points of articulation in robot mode and an open chest chamber to store the Autobot Matrix of Leadership. Builders can even attach the jetpack in robot mode and place the included ion blaster and Energon axe in the Autobot’s hands. Other authentic accessories include an Energon cube and an optional waist panel. Furthermore, there’s even an accompanying plaque to display your passion for Transformers with pride.

“It has been an honour and joy to work together with Hasbro to develop a Lego version of Optimus Prime,” said Joseph Patrick Lyde, senior designer at the Lego Group. “I am excited to see these two toy companies come together for the first time to celebrate the leader of the Autobots. Optimus Prime has become a pop culture symbol of courage, selflessness, and great leadership as well as an awesome toy that embodies the problem-solving and creativity skills that both companies value so much. It’s been a wonderful and challenging task to bring him to life using Lego bricks, especially making sure that he can shift modes without disassembly and stay true to his signature look and style.”

Are Snap Ships the New Lego?

Jeremy created MenStuff in June 2014 in order to bring unique men’s lifestyle news, features and articles to the world. While also talking about himself in the third-person, Jeremy has worked as a professional journalist at SA Rugby magazine, MyBroadband, MyGaming, and written for FHM and TFG Tech.

Are Snap Ships the New Lego? 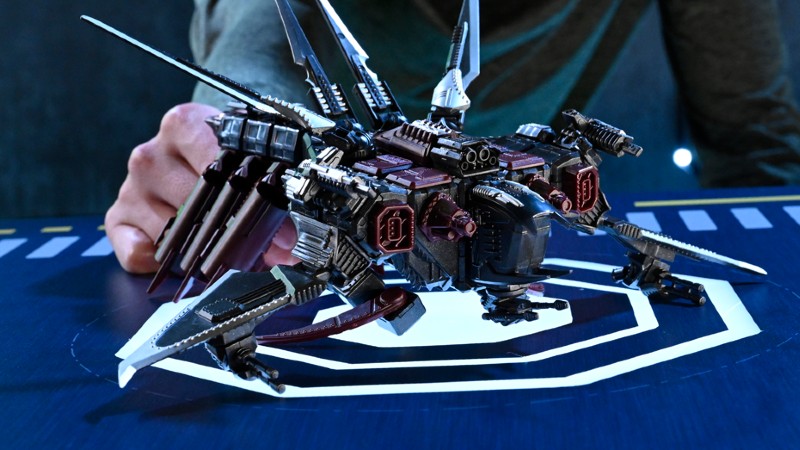 Snap Ships may look like a blend between Lego and Hasbro’s Transformers line, but it’s a whole new range of toys created to bring education, entertainment, and an innovative spin on the toy market.

Said to be for boys aged 8 and up, the playsets offer a new take in the build-and-play world, where you get to build different space crafts which have tons of configurations that allow you to change the craft design again and again, as all the sets and pieces are interchangeable.

This versatile building system allows you to create multiple crafts. To get you started, each set includes instructions for builds that you assemble yourself. The core of every ship build are the interlocking cubes, which easily snap together to build and rebuild.

“Snap Ships is a whole universe of excitement. It’s building blocks meets old-style battle play, but for a new generation. Created specifically for boys aged eight and up, as well as collectors, the construction toys allow for numerous configurations, as many as the imagination can muster,” says Philip Galliford, Senior Marketing Manager of Solarpop. “The animated series and app adds to the Snap Ships universe, bringing to life characters, storylines and the crafts themselves.”

As mentioned, there is a Snap Ships animated YouTube series to provide some context and an overarching universe for the toys. The show follows the Komplex, aliens that have been destroying species in the galaxy, and their battle with the Forge, the elite team of humans fighting against them. Both use modular ship technology to build and adapt their spacecraft.

There is also a free Android and iOS app that features easy-to-follow build instructions, with life-size digital versions of the crafts that can be viewed with AR. The app allows you to catalogue your collection and discover new builds. You can also track your collection and test-fire your ship’s weapons.

An additional wave of new products are to be released November 2021.

Upgrade Your Fly-Swatter to the Bug-A-Salt Shotgun – Now Available in SA!

You wouldn’t hurt a fly, but the Bug-A-Salt would… 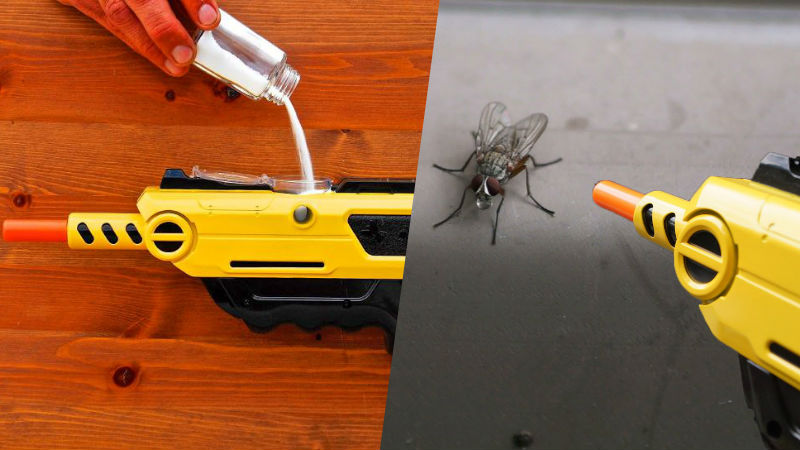 It seems like whether it’s summer, winter, rain, or shine – there are annoying insects pestering you all year-’round these days. Trying to track down one annoying fly or mosquito with a measly fly swatter can be a rage-inducing exercise as they’re always able to evade even the quickest swipes.

Luckily, that annoying issue has become a cue of genius for the creators of the Bug-A-Salt shotgun – the next level of insect-annihilating weaponry. For those who predict holes in their walls and SWAT police marauding through their roofs – don’t fear; it’s completely harmless to everything besides the pesky critters you’re aiming at; and now it’s available in SA!

That’s because the only ‘ammunition’ you need for it is fine salt; you load the salt into its chamber, cock it, and take aim at the pint-sized home intruder, and BOOM, they’re history. Check out this video of the gun in action:

If your summer evenings are often spent hunting after all kinds of annoying insects (without much success) with a kitchen cloth or fly swatter, maybe it’s time to upgrade your arsenal.

You can pick up a Bug-A-Salt shotgun for R799 from the official Bug-A-Salt South Africa website, with some other combos and add-ons available too.

The Lego Ford Mustang is launching in SA, and here’s what you need to know about the pint-sized replica! 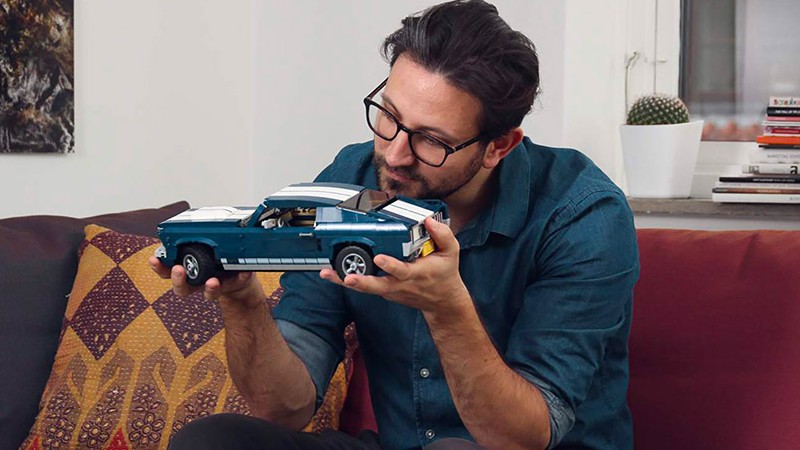 To celebrate International Lego Day (which is 28 January, for those who may not know), Ford and the Lego Group have teamed-up to release a brand-new 1967 Fastback set, which is available to purchase in South Africa.

Made up of 1,470 pieces, the nostalgic muscle car comes complete with working steering, dark-blue bodywork, white racing stripes, bonnet scoop, printed Mustang grille badge, GT emblems, and five-spoke rims with road-gripping tyres. Measuring over 10 centimetres high, 34 centimetres long and 14 centimetres wide, the set gives budding builders the chance to customise their all-American icon to their own specification thanks to a collection of optional add-ons – while retaining its instantly recognisable symbol of the Mustang pony logo. Customisation options include a supercharger, rear ducktail spoiler, beefy exhaust pipes, front chin spoiler and a nitrous oxide tank for an authentic muscle car build experience. “The Ford Mustang is one of the most iconic muscle cars of the past six decades, and to have its combination of design and heritage replicated by this set is exciting for fans of both Ford and Lego,” says Doreen Mashinini, General Manager Marketing at Ford Motor Company of Southern Africa (FMCSA).

The authentic replica model also allows owners to store items in the trunk or lift the hood to reveal a detailed big block 6.4-litre V8 engine with battery, hoses and air filter detailing. The rear axle of the car can be lifted for an extra-mean look, the doors can be opened and the roof panel removed to give access to the detailed interior with classic seats, radio, working steering and a mid-console gearshift. A printed mustang grille badge, GT emblems and a selection of license plates add the final touches to this extraordinary Lego Creator Expert model.

While the 1967 Fastback is a great choice for LEGO fans the latest Ford Mustang offerings are sure to get your heart racing. In South Africa the Ford Mustang is available in fastback and convertible body styles, with a choice of a 331kW 5.0-litre V8 petrol engine, or the 213kW 2.3-litre EcoBoost petrol engine – all using Ford’s advanced 10-speed automatic transmission.

The Ford Mustang Fastback Lego set is priced at R2,589 and is available on Takealot. 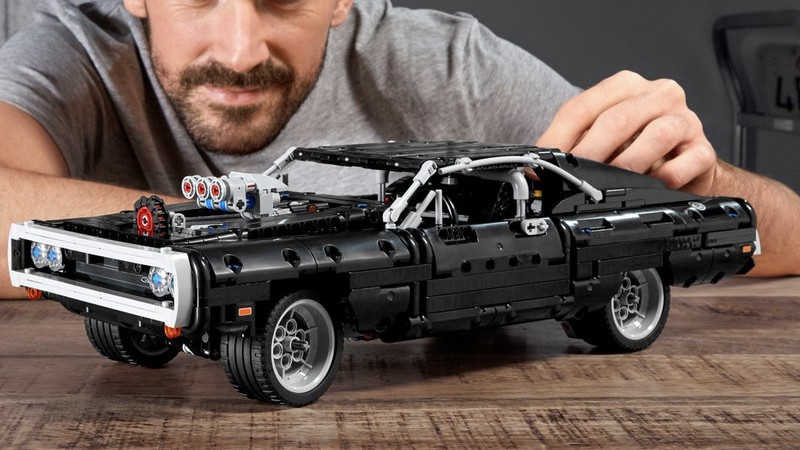 Muscle car lovers and Fast & Furious fans are getting set for the ultimate thrill as Lego and Universal have announced a new set inspired by the high-octane, global blockbuster franchise: the awesome 42111 Lego Technic Dom’s Dodge Charger.

The 1,077-piece replica of Vin Diesel’s character Dominic Toretto’s legendary 1970 Dodge Charger R/T will provide an exciting new building challenge as fans gear up for the latest instalment in the Fast saga – F9, which hits theatres around the world beginning in April 2021. Once the build is complete, fans can try out Dom’s trademark stunts and recreate the daring high-speed chases from the Fast & Furious movies with the model. And when the streets need a rest, the model can be proudly displayed in its famous wheel-stand position. The authentic replica of Dom’s all-time favourite car is packed with the same realistic details seen in the films. Just like the full-size version, the hood of the Lego Technic Dom’s Dodge Charger pops open to reveal the iconic V8 engine. Fans can feel like they’re in the garage with Dom fixing up his latest project as they build moving pistons, double wishbone suspension, a wheelie bar to show off the car’s best moves and (of course) put the nitro bottles in the trunk. If things get too hot, there’s a fire extinguisher in the cockpit too.

The 1:13 scale Lego Technic Dom’s Dodge Charger is designed for builders aged 10+. The set will be available to pre-order from 31 March from the Lego Store and to buy nationwide from 27 April 2020 at a recommended retail price of R1,699.99. Super Mario Finally Gets his Own Lego Set

The world’s most famous plumber gets a blocky reinvention. 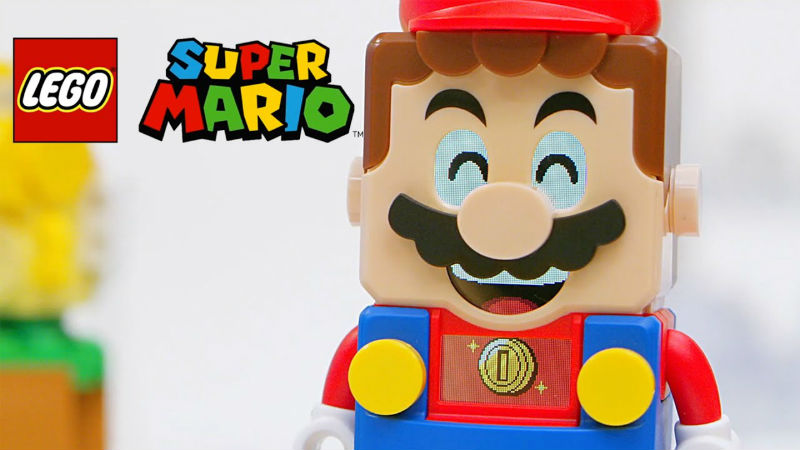 Batman, Harry Potter, and Star Wars have all had their opportunity to become Lego sets, but no its time for one of the most iconic video game characters of all time to have his blocky-time in the sun.

That’s right, the moustachioed Italian plumber, Super Mario, is getting his own Lego release, which takes more of an interactive approach to the tried-and-tested Lego formula.

You can build your own Mario-inspired Lego levels with a whole set of new bricks, and use Mario to jump and work his way through the creations in order to collect coins.

“We are very excited to bring Mario into the physical world through interactive and social Lego play”, said Julia Goldin, Chief Marketing Officer, EVP of the Lego Group. “With this experience we will help millions of kids with love for Mario to engage and play in a completely new way, where they are in control of creating and playing games with their favourite character. By seamlessly incorporating the latest digital technology, Lego Super Mario is a highly social, interactive and collaborative experience for kids.”

“I have always liked Lego products and how they help children use their imagination to play”, said Takashi Tezuka, Executive Officer and Game Producer of Nintendo Co., Ltd. “The new product we created together with the LEGO Group seeks to combine two different styles of play – one where you freely build the world of Mario and the other where you play with Mario in the very world that you have created.”

Lego Super Mario will launch later this year, and more information will be made available in the future.