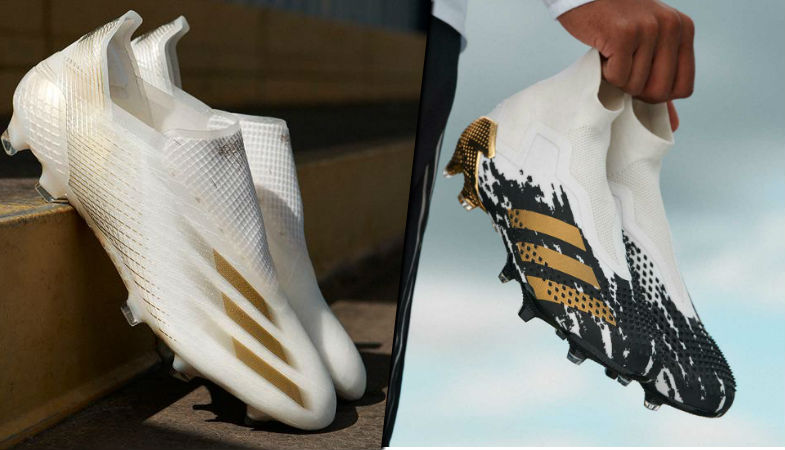 Adidas have been dramatically altering their football line in the past few seasons, with the Predator, Copa, Nemeziz, and X models all receiving notable upgrades and changes. The latest colourway batch, titled the InFlight pack, marks a dramatic change to the look and feel of just about all the boots, and these tweaks which will undoubtedly catch the eye of boot fans. Starting with Adidas’ speed boot, the new X Ghosted features a predominantly white colouring, with gold and black accents. The silhouette of the boot has changed from the previous Adidas X19.1 model, and now features a design which harks back to the F50 shape from the early 2000s.

The studs have also changed a bit, with the previous triangular studs on the X19.1 now swapped out for some rounded chevron-like studs.

Like previous X models, the Ghosted+ is a laceless variant, while the Ghosted Like the X Ghosted model, the Predator sticks to the white, gold, and black colour-combo, but goes heavy on the gold and black. Barring the colourway, the latest Predator features the same tech specs as the previous model, with high-cut and low-cut models available, along with a laceless Predator 20+ version.

The Adidas InFlight pack will launch in September.

What do you think of the new adidas 20+ InFlight football boots? Let us know by tweeting @MenStuffZA, posting on our Facebook page, or commenting below.