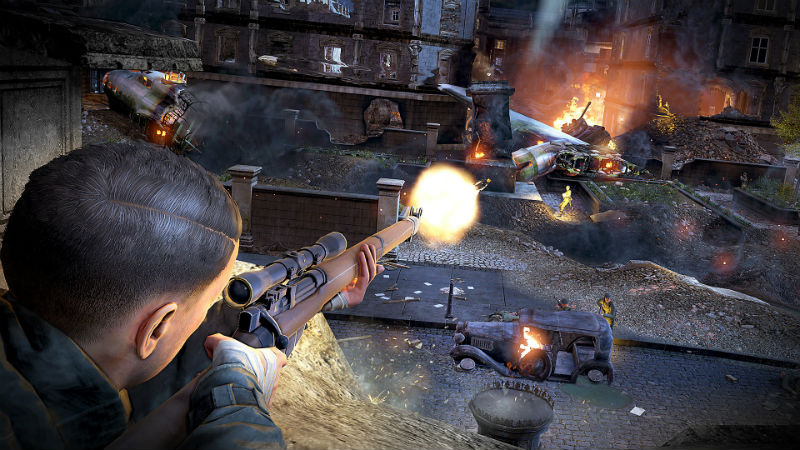 Is the remastered edition of Sniper Elite 2 worth rejoining the fight for?

Playing Sniper Elite V2 Remastered reminds one how little the franchise has changed over time – for better and worse. Firstly, it’s a testament to compare the more recent Sniper Elite 4 to V2 Remastered and appreciate how solid this 7 year old game is. On the other hand, though, it does also highlight to subtle gameplay tweaks done following this entry that have made the latter games in the franchise such a joy to play.

From the get-go, V2 is still as solid as ever. The shooting mechanics are punchy and enjoyable, and even though the secondary weapons (machine guns, pistols, etc) do lack a little feedback and impact, the sniping is as convincing and powerful as ever. And if you thought shooting virtual Nazis in the testicles would get old, you’re wrong. The X-Ray bullet cam is as gory and satisfying as it’s ever been, and is one of the slices of the game that has benefited from the spruced-up visuals.

Speaking of, the game looks tremendously better thanks to some higher-res textures, better lighting, and 4K support. The greatest changes can be seen on the protagonist Karl Fairburne himself, with his clothing, gear, and movements being far more detailed. The layout and design of the levels haven’t changed, but having the crisper, clearer draw-distance and sharper enemy models also help for the long-range shooting that you’ll be spending most of your time doing.

Content wise, Sniper Elite V2 got a fair bit of downloadable add-ons, so you’ll get this all from the get-go with the remastered edition, including the fun yet difficult ‘Assassinate the Führer’ mission where you attempt to blow Hitler’s wig off, three additional challenge levels, and a bunch of new character skins, if you feel like ole Karl needs a break from the action. Of course, besides shooting members of the Third Reich, there’s a whole bunch of planting bombs, stabbing, and espionage-ing you need to do, and during stealth sections, this is sometimes where the game does show it’s age a little. Enemies’ vision paths remain somewhat inconsistant, whereby an enemy quite a distance away will spot you around a corner, whereas some will walk straight past you without a blink. For the most part, it does work, but there will be those odd scenarios where your sneaky strategy is ruined by a moment of superhuman AI.

So, should you buy it?

While V2 is a unique game in it’s own right, it’s hard not to have the discussion whether one should just buy Sniper Elite 4 instead of this, especially given it’s lower price-tag at this stage in time. Sniper Elite 4 is a better game, but if you’ve burned through the more recent iterations of this franchise and want to jump back to the front-lines of WWII, Sniper Elite V2 Remastered is definitely worth picking up, especially at a lowered price of R549.