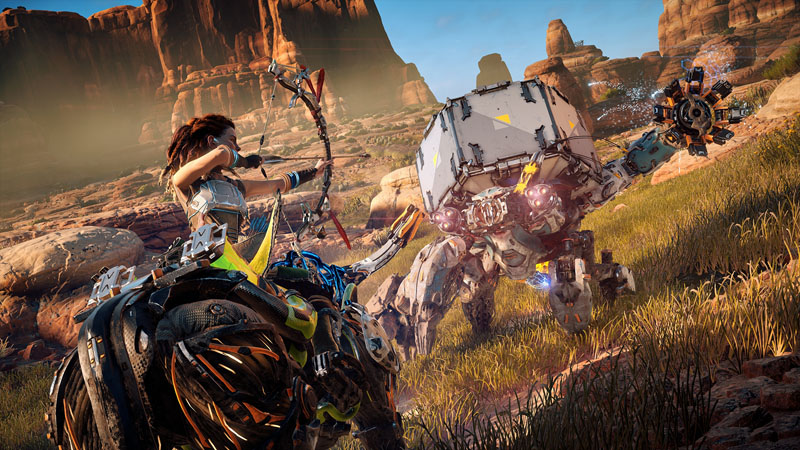 Coming from the team behind the highly-acclaimed Killzone franchise, Horizon: Zero Dawn is looking to be one of the biggest games coming in 2017. While the colossal action-adventure game is still a week away from hitting South African shores, the international reviews are beginning to roll in. Here’s what they have to say:

“Across a vast and beautiful open world, Horizon Zero Dawn juggles many moving parts with polish and finesse. Its main activity – combat – is extremely satisfying thanks to the varied design and behaviours of machine-creatures that roam its lands, each of which needs to be taken down with careful consideration. Though side questing could have been more imaginative, its missions are compelling thanks to a central mystery that led me down a deep rabbit hole to a genuinely surprising – and moving – conclusion.”

“None of Horizon’s faults stopped me from sinking 55 hours into the game, or walking away supremely satisfied with the experience. Horizon may not be a revolution for the open-world genre, but it is a highly polished and compelling adventure that proves Guerrilla is more than a single franchise.”

“Horizon Zero Dawn is familiar but also really refreshing. It’s not a short game (I spent around 30 hours with it), but the storytelling still feels concise and efficient. The combat has some nice options that make encounters fun, even when you’re just stacking up stealth kills from the relative safety of a bush. And the presentation end of the game holds up its end of things with a solid soundtrack, great voice acting, and a cohesive design that makes all its disparate parts fit together. All in all, it’s a great game, it’s Guerrilla’s strongest release to date, and I suspect I’ll go back in after the fact to clean up whatever side quests and errands I have remaining, if only to spend a little more time in that world.”

“This is first departure from the Killzone series for developer Guerilla Games, and though you might think the team took a risk by stepping out of its FPS comfort zone to create a third-person open-world action game, you’d never know it was their first rodeo. For every minor imperfection, there’s an element of greatness that recharges your desire to keep fighting and exploring Zero Dawn’s beautiful and perilous world. Guerilla Games has delivered one of the best open-world games of this generation, and redefined its team’s reputation in the process.” “Horizon Zero Dawn thrums with the energy of a creative team finally allowed to explore something new. It builds on elements of open-world and loot-and-craft gameplay that we’ve seen before, but it does so within a context, a setting and a style that feel fresh. Horizon Zero Dawn discovers a stronger sense of its own personality in one game than Killzone ever managed across half a dozen. Guerrilla Games has long been developing some of the most buzzed-about games in the industry; with Horizon, it feels like it has finally found its own voice, one worthy of all that buzz.”

“Horizon: Zero Dawn is a work of considerable finesse and technical bravado, but it falls into the trap of past Guerrilla games in being all too forgettable. For all its skin-deep dynamism it lacks spark; somewhat like the robotic dinosaurs that stalk its arrestingly beautiful open world, this is a mimic that’s all dazzle, steel and neon yet can feel like it’s operating without a heart of its own.”

“Like a real ecosystem, Horizon: Zero Dawn is brilliantly balanced. Aloy feels like an inextricable part of it, halfway between prey and predator. Whether you’re climbing cliff-faces with a weightless, fluid joy, hunting, or travelling through the landscape, Horizon: Zero Dawn takes you on a tour of discovery. An endless sense of wonder and awe push you onward no matter what you’re doing. The more time I spend in Horizon: Zero Dawn’s world, the less I want to leave.”

Are you excited for Horizon: Zero Dawn? Let us know by tweeting@MenStuffZA and commenting below.