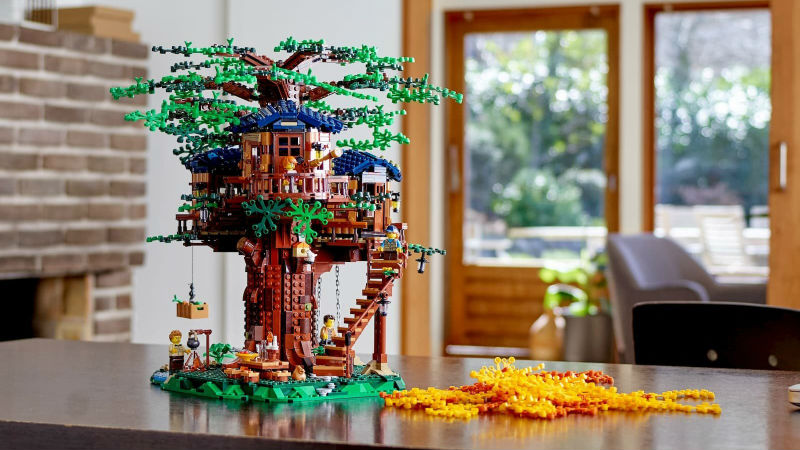 Modern consumers are calling for everything to become a little more sustainable… even toys. In an effort to become more environmentally responsible, the Lego Group has committed to making products using sustainable materials by 2030. Lego first launched its bricks made of plant-based polyethylene in 2018, which included botanical elements such as leaves, trees and bushes, paving the way for a more sustainable future for one of the world’s most popular toy brands. Now, in another exciting move, Lego has just launched the Lego Ideas Treehouse, featuring the highest number of sustainable bricks ever included in a Lego set.

With more than 3,000 parts, The Treehouse is one of the largest Lego Ideas sets yet released and includes more sustainably manufactured bricks than any other set released to date. Most notably all 185 plants and leaves in the set are made from sustainable materials sourced from sugarcane. This includes the treetop canopy, which has interchangeable sets of green summer leaf elements and yellow and brown autumn leaf elements. The Treehouse is the latest set to come from the Lego Groups co-creation programme which allows Lego fans to submit their original ideas through the LEGO Ideas platform. After a period of user reviews and support from other Lego fans, the build can end up as a certified Lego set with the help of Lego master designers. In this case, the model was submitted by fan designer Kevin Feeser from Nancy, France. Kevin’s motivation for creating a treehouse stems from his passion for the great outdoors combined with his sophisticated LEGO building skills.

The LEGO Ideas Treehouse model is available directly from LEGO Certified Stores in Sandton City and Menlyn Park, or from www.greatyellowbrick.co.za from 1 August 2019.

Super Mario Finally Gets his Own Lego Set