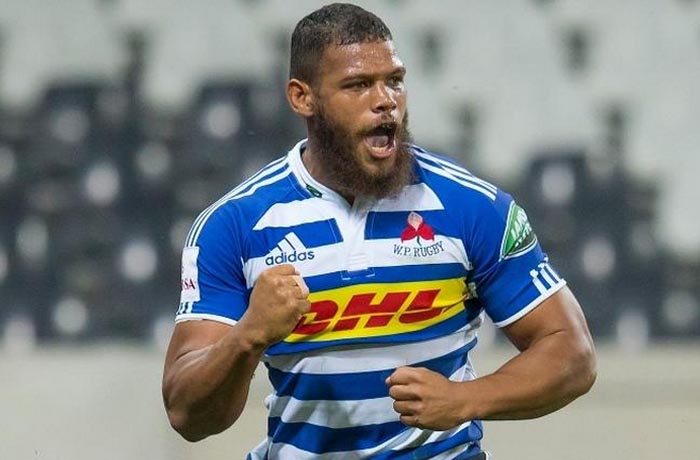 Five newcomers and two returnees have been added to the bulk of the Springboks’ Rugby Championship squad as the national selectors opted for continuity and rewarding form in naming a 36-man squad for next month’s tour to the Northern Hemisphere.

Twenty-nine of the 36 players named for the Outgoing Tour were part of the Rugby Championship squad. They will be joined by the uncapped quintet of Robbie Coetzee, Julian Redelinghuys, Nizaam Carr, Jaco Kriel and Seabelo Senatla, while Coenie Oosthuizen and Johan Goosen have been recalled to the squad for the tour of four Tests.

“It’s wonderful to have this kind of continuity in selection, while the five uncapped players in the squad have all been rewarded for superb form throughout the season,” said Springbok coach Heyneke Meyer.

“Many of the selected players were at our training camp in Stellenbosch last week where we put in a lot of very hard work. We’ll have to hit the ground running when we assemble in Johannesburg on Wednesday before we depart on what will be a challenging tour.

“We start against the Six Nations champions in Dublin and then take on England, who have been on an upward curve over the last couple of years. Italy is always a tough customer at home and the Welsh have probably been one of the most consistent teams in the last number of seasons.”

Meyer congratulated all the players with their selection and said he is looking forward to the opportunity to work with the five newcomers for the first time.

“Julian has been impressive all season and if it wasn’t for injuries, he might have been a Springbok already,” said Meyer.

“He was great in Vodacom Super Rugby and the Absa Currie Cup, where his strong scrummaging has been a hallmark of the Lions’ play. Going north, scrummaging will be vitally important and we would like to see what he can do in those circumstances.

“Next to Julian, Robbie was part of a very dominant Lions scrum throughout the season and this is also a reward for his consistently good performances, while he is also very secure when it comes to throwing into the line-outs.

“Both Nizaam and Jaco have been great in 2014, building on their fine Vodacom Super Rugby form in the Absa Currie Cup where they excelled in the two teams that reached the final.

“Nizaam is a versatile loose forward who can play any position in the back row and has proven his worth at flank and No 8 this season.

“Jaco, who is really very fast for a loose forward and scored the most tries in the Absa Currie Cup this season, is more of a traditional openside flank, a position for which we need cover following Francois Louw’s injury.

“This tour will be a great challenge for both these players to see what they can bring to the table, especially as we only have eight Tests left before the Rugby World Cup next year and we have to ascertain what depth we have at our disposal.

“Seabelo’s speed is well-known to anyone who’s seen him play for the Blitzboks this year and he is now the third player from the Springbok Sevens set-up to be called-up to the Springboks, which is a great compliment to their structures. He’s also made the most of his opportunities in the Absa Currie Cup and we’d like to see if he can take another step up in the toughest circumstances.”

On the returning Oosthuizen and Goosen, Meyer said: “Coenie has been out injured but he made a great return recently. He can pack down on both sides of the scrum and he is in excellent condition, so it’s a pleasure to welcome him back.

“Johan is now playing most of his rugby at fullback and is performing very well in a position where I’ve always thought that he could become a great player. His versatility will come in handy if needed as he is a similar player to Willie in many ways. We also have Pat Lambie who is a great option at fullback – with a smaller squad for the Rugby World Cup next year, these options will be very important.”

None of the overseas-based players will be available for the final match of the tour, against Wales in Cardiff on 29 November, as it falls outside the international Test window. Ruan Pienaar’s selection in the squad is pending a fitness Test next week in Dublin, where he will join the squad on Sunday.

“The Test in Cardiff will be our second of the season which falls outside the window and as we saw in Port Elizabeth against Scotland in June, this is a great test of our depth,” said Meyer.

The following Springboks and players who have been involved with the national team before were not considered for selection due to injury: Fourie du Preez, Schalk Brits, Callie Visagie, Frans Malherbe, Marcel van der Merwe, Flip van der Merwe, Pieter-Steph du Toit, Francois Louw, Siya Kolisi, Arno Botha, Pierre Spies and Willem Alberts. The latter could come into consideration at a later stage during the tour.

Who Is The World’s Fastest Football Player?