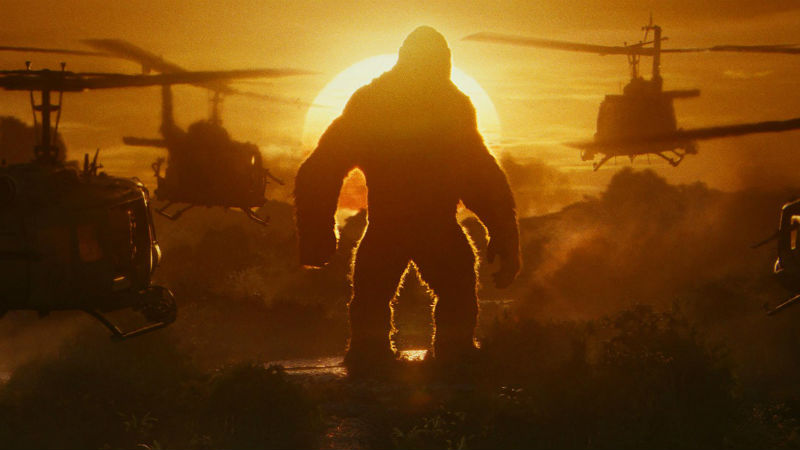 Does the King’s return leave a big enough footprint?

Kong: Skull Island is the buffet of movie experiences. Instead of selecting one genre to enjoy, you’re treated to a smorgasboard of action, adventure, horror and comedy to indulge in during its 118 minute running time, and thankfully, all those somewhat contrasting elements come together to form something incredibly entertaining.

Now, Kong: Skull Island doesn’t fall into the traditional beauty-meets-beast, skyscraper-climbing, plane-swatting story we’ve come to know (although, there are elements of that). This is rather a re-imagined origin story that slots the iconic ape into the milieu of Legendary’s new monsterverse, spring-boarded by 2014’s underrated Godzilla. The film’s plot shares a similar thread to that of Gareth Edward’s monster reboot and manages to tie in with the darker, more grittier look and feel the studio is aiming for. Of course, the film is a fair bit more fantastical than the relatively “grounded” Godzilla reboot. Kong: Skull Island is bright, colourful, and more bombastic popcorn blockbuster than Godzilla, but still manages to fit into the whole world elegantly.

The visual style of Skull Island is one to be admired too, with director Jordan Vogt-Roberts (who helmed The Kings of Summer) doing a great job at merging the horrors that appeared in Peter Jackson’s take on the island with something unique and more beastly than any iteration before it, while still staying true to the underlying thematic elements of the classic story: that man is the real monster here. It positions the film excellently with the post-Vietnam 1970s setting of the story, where viewers are given an Apocalypse Now-inspired journey through a monstrous island, and with the characters (who each have interesting chips on their shoulders) looking for redemption on the island in one way or another.

The result is an attempt to tell a personal, more intricate tale of what happens when the savagery of humanity meets the power of nature; but whether that’s successful or not is irrelevant, because what we do get with Kong: Skull Island is a visual spectacle full of moments that’ll leave you gasping, laughing, or nodding in approval – and if that’s not a successful blockbuster, I don’t know what is.