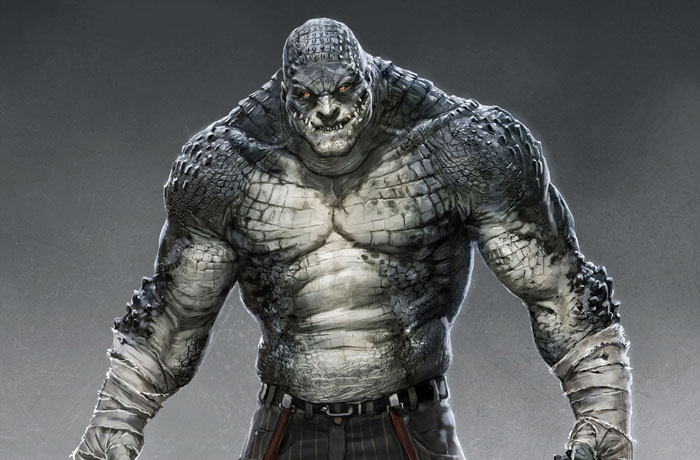 A new report claims that Killer Croc will be involved in the Suicide Squad movie.

Is the Suicide Squad cast adding a reptilian representative to its ranks? It sure looks that way. Most savvy internet users will be incredibly skeptical of news originating near the first of April for obvious reasons. That being said, there seems to be credible information confirming that Killer Croc has indeed been cast for the 2016 super villain ensemble film.

Adewale Akinnuoye-Agbaje is a London born actor of Nigerian origin known for his previous roles on Lost, G.I Joe: The Rise of Cobra, and Oz and will be featuring on the fifth season of Game of Thrones as well. Although not a household name (yet) he’s been very active over the last few years and stands to get some serious exposure in Suicide Squad.

Those hoping to put a name to the face might be disappointed though; because chances are good that heavy prosthetics and a healthy dose of CGI will be transforming Adewale completely.

For those who aren’t familiar with the Batman villains, Killer Croc is a man named Waylon Jones with the appearance of a humanoid reptile strongly resembling a crocodile. Yeah, you read that correctly. This isn’t a rejected episode of the X-Files. Killer Croc is usually just a muscly henchman, but no details as to his character or look in the movie have been released.

The inclusion of this character in Suicide Squad is further confirmation that the DC Cinematic Universe is moving further and further away from the grounded world that Nolan created with his Dark Knight Trilogy. Gone are the days of spray-painted Arnold Schwarzeneggers and spandex wearing Jim Carreys. The DC Cinematic Universe is fully embracing the slightly more supernatural and off the wall characters.

Suicide Squad starts shooting next week, so you can look forward to a torrent of images and additional news in the coming weeks. Both Jared Leto, our new Joker, and the director David Ayer have been tweeting out pictures showing little glimpses of the secretive project.