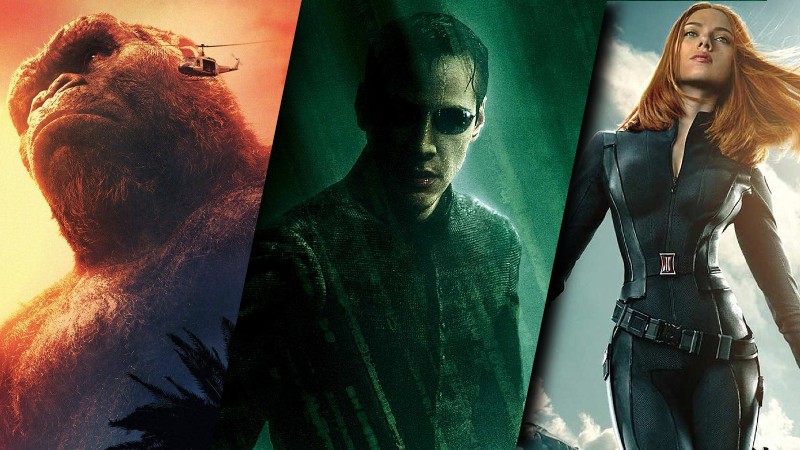 Which movies should be on your radar in 2021?

Share
Tweet
Share
Share
Email
Comments
The 2021 movie slate is upon us, with some colossal releases, blockbusters delayed from 2020, and some smaller surprises awaiting eager movie-goers. We’ve rounded up the most-anticipated films hitting the big-screen this year:

Release date: 6 August 2021 After the lacklustre 2016 Suicide Squad, Guardians of the Galaxy director James Gunn has been called in to soft-reboot the DC supervillain outing, which he is simply calling The Suicide Squad. Margot Robbie returns as Harley Quinn, along with Joel Kinnaman (Rick Flag), Viola Davis (Amanda Waller), Jai Courtney (Captain Boomerang) returning from the first film, with Idris Elba, John Cena, and a host of other actors joining what is to be a huge outing for the DC universe. Little is known about The Matrix 4, but it’s a Matrix movie, so there’s hype around it. The film will see Keanu Reeves and Carrie-Anne Moss reprise their roles as Neo and Trinity, with Neil Patrick Harris will also be joining the cast.

Release date: 21 May 2021 Night at the Museum and Real Steel director Shawn Levy’s new film stars Ryan Reynolds as a bank teller called Guy, who realises that he is a background character in an open world video game called Free City that will soon go offline. The Marvel Cinematic Universe has been on hold throughout the pandemic, but will be getting back on track with the prequel Black Widow, but Shang-Chi will be the first real glimpse of what the franchise has planned next. The film stars Simu Liu as Shang-Chi, a martial artist who’s drawn into a vast criminal conspiracy. The ensemble includes Awkwafina, Tony Leung, and Michelle Yeoh, and the director is Destin Daniel Cretton.

Release date: 29 January 2021 Denzel Washington, Rami Malek, and Jared Leto headline this psychological thriller which follows two cops hunting down a serial killer, with the cops not seeing eye-to-eye on exactly who the lead suspect is.

No Time to Die

Release date: 30 September 2021 It’s been almost 5 years since the last James Bond movie, but Daniel Craig is back to follow up Spectre in the next (and supposedly his last) film as 007. In No Time To Die, Bond has left active service and is enjoying a tranquil life in Jamaica. His peace is short-lived when his old friend Felix Leiter from the CIA turns up asking for help. The mission to rescue a kidnapped scientist turns out to be far more treacherous than expected, leading Bond onto the trail of a mysterious villain armed with dangerous new technology. Alongside Craig, Bohemian Rhapsody’s Rami Malek takes on the role of the villain this time around, with Ralph Fiennes, Naomie Harris, Léa Seydoux, Ben Whishaw, and Jeffrey Wright all along for the ride.

Release date: 21 May 2021 Chris Rock (of all people) is fronting the reboot/reimagining of the Saw franchise, with Samuel L. Jackson also starring. The film sees Rock and Jackson investigating a line of gruesome murders which seem all too familiar to some past horrors.

Release date: TBC 2021 Anything Guillermo del Toro (Hellboy, Pacific Rim, The Shape of Water) touches is going to feature frightening or monstrous creatures and a compelling story, and that seems to be the case with Antlers, which has received its first trailer. Del Toro is a producer on the film, with Scott Cooper (Black Mass, Hostiles) directing; with the film follows a small-town Oregon teacher (Keri Russell) and her brother (Jesse Plemons), the local sheriff, who discover that a young student (Jeremy T. Thomas) is harbouring a dangerous secret that places the entire town in danger. The script for Antlers was adapted from short story from Nick Antosca, creator of horror anthology series Channel Zero, although not much is known about Antlers other than the basic premise.

Release date: 26 March 2021 Veteran actor Bob Odenkirk stars in this John Wick-esque story of Hutch Mansell, an ordinary man who has PTSD, who decides not to defend himself and his family during a house break-in because he fears he will end up in another traumatic experience. With his family disappointed in him, Hutch’s long-simmering rage boils over, and causes him to go down a dark path that exposes his dark secrets and lethal weapons. Hutch must save his family from a mafia boss and make sure that he is never underestimated by anybody again.

Shadow in the Cloud

Release date: 1 January 2021 Chloë Grace Moretz (Kick-Ass) stars in the World War II-era creature feature Shadow in the Cloud from director Roseanne Liang. Moretz’ character is tasked with transporting some top secret documents aboard a B-17 Flying Fortress, but encounters an evil presence onboard the flight. The film already picked up some buzz at certain film festivals, and will be touching down on digital platforms on 1 January.

Release date: 22 January 2021 Liam Neeson is back in yet another gritty action-thriller, and we’re stoked. This time, Neeson plays Jim in The Marksman, a hardened rancher in an Arizona border town who helps a young boy escape across America while being chased by the leaders of a Mexican drug cartel. The film is directed by Robert Lorenz, and produced by Lorenz along with Tai Duncan, Warren Goz, Eric Gold and Mark Williams.

Release date: 15 January 2021 Initially planned for a 2020 release, then delayed until early 2021, Don’t Tell a Soul, the film stars The Office‘s Rain Wilson, and follows two thieving teenage brothers, stealing money to help their sick mom, who are forced to match wits with a troubled security guard stuck at the bottom of a forgotten well. Don’t Tell a Soul looks like one of those thrillers where you never know how it’s going to end until the final moment, which is a recipe to become a cult-classic.

Release date: 29 April 2020 With the Infinity Saga phase of Marvel’s ever-expanding universe all wrapped up, the studio is now looking to flex its muscles with some of the lesser-appreciated characters – with Scarlett Johansson’s Black Widow finally getting her solo movie. Directed by Cate Shortland, Black Widow will explore the life of assassin-turned-Avenger Natasha Romanoff after the events of Captain America: Civil War, and everything leading up to Infinity War.

Release date: 25 June 2021 The Fast & Furious franchise heads into its ninth primary instalment with some new faces, as Vin Diesel and the usual crew are joined by John Cena, Helen Mirren, Charlize Theron, Michael Rooker, and Cardi B.

Release date: 23 April 2021 The release date for the sequel to sensory-horror film A Quiet Place has been pushed out again and again, but that doesn’t hamper our excitement one bit. Emily Blunt returns to her role from the first film, searching for a new haven for her children in a world overrun by blind but deadly monsters. Cillian Murphy and Djimon Hounsou flesh out the cast, while writer and the original’s star John Krasinski also reprises his role from the first film through flashback sequences.

Release date: 25 March 2021
After we’ve been introduced to the new King Kong in Kong: Skull Island and Godzilla in 2014’s reboot and sequel Godzilla: King of the Monsters, the two iconic movie beasts will go head-to-head in this year’s Monsterverse mash-up. Adam Wingard, who directed Netflix’s Death Note adaptation, is directing the colossal release.

Release date: 20 August 2021 A prequel to the Kingsman franchise, The King’s Man jumps back in time to the 1960s, whereby we witness the formation of the super-agent secret service.  The film features an ensemble cast that includes Ralph Fiennes, Gemma Arterton, and Rhys Ifans; and is directed by Mathew Vaughn, who helmed the past two entries.

Release date: 1 July 2021 It may have been a 33 year gap, but the follow-up to 1986’s Top Gun is still set for a release, although it has slipped deeper into the 2021 release calendar. Directed by Joseph Kosinski (who helmed the under-appreciated Tron: Legacy), the sequel continues the story of Captain Peter “Maverick” Mitchell and his fighter-pilot antics in a world where war is changing drastically. But, of course, there’ll be some 80s throwbacks, including an obligatory beach scene and some stellar bomber jackets on show.

Release date: 24 June 2021 With the surprise hit that was Sony’s Venom standalone film, it was no doubt that the studio quickly green-lit a sequel. Iconic motion-capture performer Andy Serkis (The Lord of the Rings, Planet of the Apes) is in the director’s chair for this one, with Tom Hardy back to reprise his role as Eddie Brock/Venom and Woody Harrelson joining as Cletus Kasady/Carnage after his post-credit appearance from the first film.

Release date: 10 November 2021 After the underwhelming response to the 2016 reboot, Ghostbusters is getting a third instalment to the original GB timeline. The film follows a single mom and two kids who arrive in a small town and begin to discover their connection to the original Ghostbusters, along with the secret legacy that their grandfather left behind.

Release date: 18 March 2021 Thanks to a devoted internet campaign, this re-cut four-hour-long version of the 2017 DC superhero team-up is set to showcase director Zack Snyder’s true vision for the film. The movie will include previously unseen footage, newly shot additional scenes, and new elements that were absent from the 2017 theatrical release that director Joss Whedon took over when Snyder left the project for personal reasons. The Eternals is one of Marvel’s next big ensemble endevours, which sees a big cast including Angelina Jolie, Richard Madden, Kumail Nanjiani, Lauren Ridloff, Brian Tyree Henry, Salma Hayek, Lia McHugh, Don Lee, Kit Harington, Gemma Chan, and Barry Keoghan. In the film, the Eternals, who have hidden themselves for thousands of years, must re-unite to protect Earth from their enemies, the Deviants. Which movie release are you most excited for in 2021? Let us know by tweeting @MenStuffZA, posting on our Facebook page, or commenting below.

Movies in 2021: 5 Under-the-Radar Movies You Need to Know About
Netflix Movies in 2021: Check Out Footage of ‘Army of the Dead’, ‘Red Notice’, and More
To Top
wpDiscuz