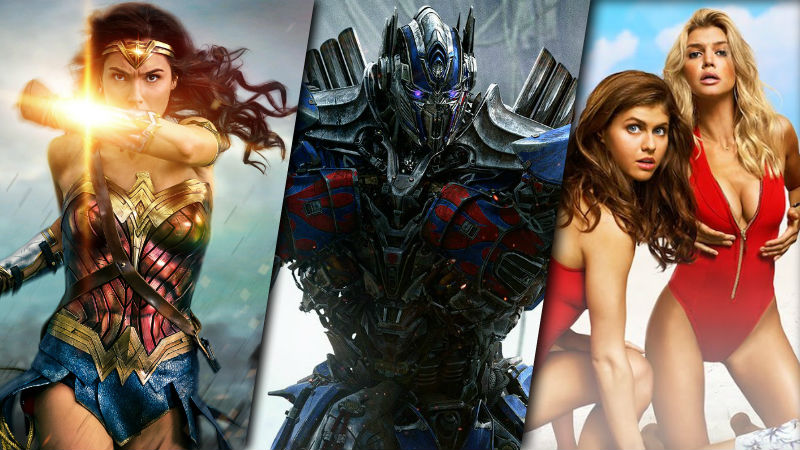 Here are the most anticipated movies arriving this month!

While we brave the cold(ish) weather down here in the Republic, June kicks off the massive month of Summer movies in the US, marking some big-name film releases. From superhero blockbusters to reboots and sequels, here’s what you can expect in the cinemas in June 2017:

Initial reactions to Wonder Woman have been impressive, and DC is looking to showcase the full extent of what it can do with its first, standalone big-screen adaptation of the iconic heroine. Gal Gadot stars in what appears to be the role of her career, with Chris Pine providing support. Taking place in the 1920s, almost 100 years before her appearance in Batman v Superman: Dawn of Justice, Wonder Woman sees the Amazonian princess being thrust into the world of man in order to help with a globe-spanning conflict.

The unlikely combo of muscle and muscle, played by Dwayne Johnson and Zac Efron, meet in this month’s reboot of Baywatch. The film follows devoted lifeguard Mitch Buchanan (Johnson), who butts heads with a brash new recruit. Together, they uncover a local criminal plot that threatens the future of the Bay. Expect a lot of slow-mo running, crude jokes, and oily bodies.

Universal is looking to kickstart its classic monsters movie universe in earnest with its latest reboot of The Mummy. This time, Alex Kurtzman wrote and directed the film, with Sofia Boutella taking on the monstrous title role, and Tom Cruise and Russell Crowe playing important cogs in the Dark Universe (as its being called). It looks like a fun return to old-school horror, with some new-age CGI providing the oohs and ahhhs.

Keanu Reeves takes a step back from snapping necks as John Wick to play a defense attorney who works to get his teenage client acquitted of murdering his wealthy father. However, as the trial goes on, things aren’t as they seem, and a whodunnit scenario around the case begins to emerge.

There’s something about the Cars franchise that is undeniably alluring, and the third instalment makes its way to cinemas this month. Owen Wilson is back to voice Lightning McQueen, who sets out to prove to a new generation of racers that he’s still the best race car in the world.

We’re huge fans of Sharlto Copley (District 9, Elysium). Not only is he a proudly South African export, but he’s one of the most interesting and diverse actors in Hollywood. The Joburg-born star is featuring in a brand-new movie executive produced by none other than Martin Scorsese himself, and it looks great. Free Fire tells the story of Justine (Brie Larson), who has brokered a meeting in a deserted warehouse between two Irishmen (Cillian Murphy, Michael Smiley) and a gun-dealing gang led by Vernon (Copley) and Ord (Armie Hammer). But when shots are fired in the handover, a heart stopping game of survival ensues.

Looking like a mix between Bridemaids and The Hangover, Rough Night is the latest all-female comedy about a group of friends who end up killing a stripper during a bachelorette party, and the chaos that ensues following the disaster. Scarlett Johansson, Kate McKinnon, Jillian Bell, Ilana Glazer, and Zoë Kravitz all star.

Avatar‘s Sam Worthington has been somewhat quiet in recent years, but the talented Aussie actor makes his return in The Hunter’s Prayer, where he plays an assassin who forges an unlikely relationship with one of his targets: a woman seeking revenge for the murder of her family.

The intergalactic robot war is getting another cinematic instalment in 2017 with The Last Knight, marking Michael Bay’s fifth entry into the series. Mark Wahlberg reprises his role as Cade Yeager from Transformers: Age of Extinction. Anthony Hopkins also joins the cast, and after skipping the last instalment, Josh Duhamel will return as William Lennox, who appeared in the first three films. Like previous Transformers movies, The Last Knight ties into pivotal historical events in human history, and follows Optimus Prime’s search for the Quintsessons, who were said to have created the Transformers.

Those lovable yellow Minions are back once more in Despicable Me 3, which also sees the returning voice talents of Steve Carrel and Kristen Wiig. The third entry picks up where the second left off, and sees Gru meeting his twin brother Gru, who he never knew about. The two have to work together to stop a new villain Balthazar Bratt, voiced by South Park‘s Trey Parker

What movie are you most looking forward to this month? Let us know by commenting below and tweeting us @MenStuffZA!