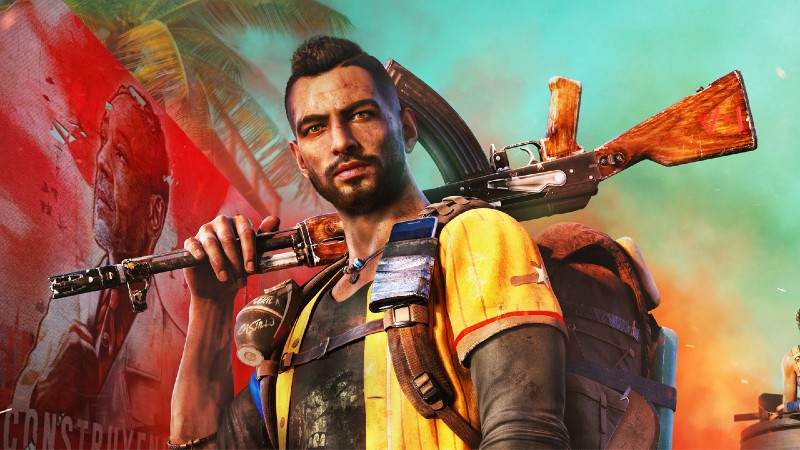 Ubisoft’s tyrant-toppling franchise is back with Far Cry 6, throwing players back into yet another deadly open-world environment in an attempt to stop an evil leader. But, while it all feels very familiar, Far Cry 6 delivers one of the best and most finely-tuned Far Cry experiences to date, one that isn’t afraid to borrow from its predecessors while also trying a few new things.

As alluded to, with any Far Cry game, you kind of know what you’re getting. A large open-world, enemy outposts to take out, fuel depots to destroy, assassinations to pull off, and so on. However, while the recurring formula can be a downer in other series, the thing with Far Cry is that it’s so open-ended in the way you approach missions, it never seems to get old. When having to infiltrate a castle, for example, you can go through the front gate, parachute into the middle, grapple-hook your way up the wall, or even sneak through a cave hidden at the back — it’s really up to you how you want to tackle missions, and allows you to still come out on top even when you trigger the alarm and things go bottoms-up, which they usually do.

Throw in the fact that Far Cry 6 features some truly awe-inspiring set-piece missions in between the regular set-ups, along with a great cast of characters to fight alongside, and Far Cry 6 feels like a true evolution for the series while resting on the backbones that made the franchise so beloved in the first place.

Where Far Cry 5 found players deep in fictional middle-America, FC6 swings the action back to more of a third-world setting, taking place on the gorgeously tropical yet tyrannical island of Yara, making you feel right at home in the Far Cry universe and harking back to the island locale of the fan-favourite Far Cry 3. You play as Dani Rojas, a local Yaran who gets recruited, somewhat begrudgingly, in a revolution attempt against Anton Castillo, played by renowned actor Giancarlo Esposito (The Mandalorian, Breaking Bad). Castilllo is another memorable villain for the series, and significantly more sophisticated than past Far Cry foils. However, our hero, Dani is equally as equipped and street smart.

Unlike other Far Cry protagonists (Average Joes thrown into war or survival scenarios), Dani is a trained soldier, and keeping with that story element, the way gameplay progression has changed too. There are no more physical ability upgrades, such as the beloved Death From Above melee kill move where you can leap off rooftops to stab enemies. Instead, you’re given all the familiar abilities from the get-go, showing that Dani knows what he’s doing and leaving the progression to be more focused on weapons and gear, rather than Dani himself.

This does make Far Cry 6 feel like it dabbles in the looter-shooter genre, often rewarding you with new gear like helmets, sneakers, and gloves, which give perks to your bullet resistance, running speed, and weapon-sway, for example. You’ll be swapping out your gear a lot, and this extends to the weapons, as there are a ton of sidearms, rifles, sniper rifles and other chaos-bringers to unlock and customise. The most important of which is what Far Cry 6 calls Resolvers and Supremos. You’re able to equip one Resolver weapon (basically a game-changing overpowered firearm, such as a high-powered pistol or flame-thrower), along with a Supremo, a backpack with various abilities — one of which fires rockets, another shoots an EMP pulse, and another even creating a ring of fire around you. These are seen as the weapons that will turn the tide of the revolution in favour of the rebels, and need to be utilised in some of the tougher mission scenarios.

And there are some really tough missions, which helps balance the tangible feeling of Far Cry 6. There’s definitely a better sensation of weight in FC 6, and your presence in the world feels a lot more grounded, where vaulting over objects and moving through certain environments feels heavier and has a little more resistance, so to speak. It’s great, because it adds some much-needed balance to the bombastic action and tone of the game, and feels more tactical in its approach. You’re far more vulnerable than in previous FC games, so you’ll need to be brutally clinical if you’re going in guns blazing, or use cover effectively if you’re taking out enemies systematically. Moving swiftly is the key here, and thankfully, Far Cry 6‘s responsive controls and excellent environmental design makes this a satisfying gameplay loop.

While Far Cry 6 indulges in its sticky-taped and makeshift guerilla aesthetic, it’s an absolutely beautiful game with stunning visuals — in both environmental effects and the finer details. There is the odd random enemy AI hiccup, but that’s expected in a game of this scale. What you know you’re getting from Far Cry 6, though, is a large-scale smorgasbord of Far Cry‘s best elements, along with some new tricks up its sleeve. It’s incredibly enjoyable to play, and a blast watching things go haywire when plans don’t work out, and it’s a testament to just how fun Far Cry 6 is.