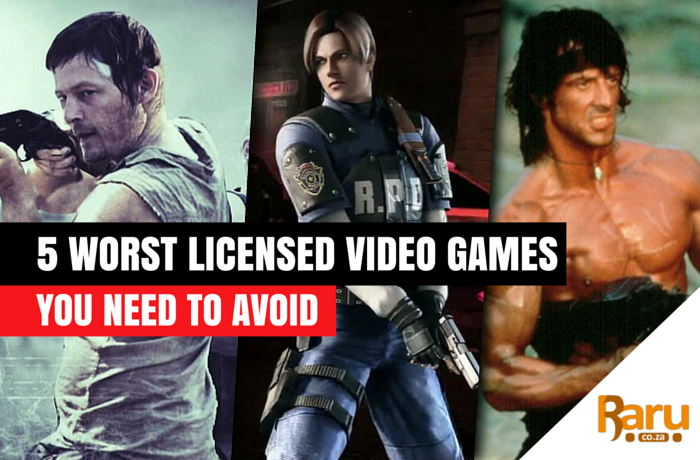 From zombie battles to intergalactic dance-offs, we have a look at some of the worst licensed games in recent years.

Fandom and loyalty to a brand or franchise can make us blind. Sometimes (and sadly, a lot of the time), developers get the opportunity to work with beloved franchises or licenses, getting us all on the hype-train, only to fail to meet up to the expectations demanded of die-hard fans.

Here are some licensed games that disappointingly wasted their potential:

Having the Rambo license in the video game world is like having the ability to print money. All you need to do is make a crazy, explosive, over-the-top jungle shooter with cheesy one-liners and oily biceps, and you won’t just be forgiven, but you’ll be rewarded – because that’s what Rambo is all about and what fans expect.

Polish Studio Teyon got to make a Rambo first-person shooter in 2014, and saying they butchered it would be an understatement. Players had to suffer through a lightgun game, played sans lightgun. Rambo moves on a predetermined path, control limited to a half-hearted dodge and an unresponsive aiming reticule. Not that aiming seems to matter, given enemies sport varying degrees of immortality.

There’s at least solid voice acting and plentiful unlockable material, but the latter unfortunately necessitates actually playing the ghastly game. Clearly, more was spent on acquiring the licence than on doing anything with it. Capcom handing out the Resident Evil license to Slant 6 games was a pretty risky move that didn’t pay off. Resident Evil: Operation Raccoon City is a pure case of lost potential.

The concept and fiction to work with is all there, but the execution was just poor. The story isn’t really coherent to anyone unfamiliar with the background of the series, and the controls and design choices hamper the experience a little too much to be enjoyed; and while the multiplayer acts as a fun distraction, it doesn’t pull the game out of the hole it digs during the single-player moments. The idea of a Walking Dead first-person survival stealth shooter sounded amazing, and the the fact that you got to play as everyone’s favourite cast member, Daryl Dixon, sounded like gold to franchise fans. Despite the hope, The Walking Dead: Survival Instinct disappointed lovers of the show and general zombie fans all around.

Reviewers panned the game for being very short, buggy and delivering repetitive mechanics throughout the experience. It was awkward, clumsy, and incredibly short-lived. Even if this was an easy-target in a zombie apocalypse, there were no brains for any zombie to go after. We never thought we’d see the day when fans refused a Star Wars video game, but they did. Kinect Star Wars had a bad rep from the get-go for its franchise-milking exploits, but the line had been crossed when Star Wars Kinect’s infamous dance-segments were revealed to be real.

While there was a slight charm in wielding a virtual lightsaber in the other modes, the Force was brutally mutilated to become the farce; through bad voice overs, the over- and under-use of rail-styled gaming and unresponsive controls, Star Wars Kinect is just not the game we wanted it to be. Battleship: The boardgame: The Movie: The Videogame was more watered-down than a slip ‘n slide before it even hit store shelves. While there was slight potential and money behind the game, an underwhelming generic first-person shooter was at the core of all the hype, and although Double Helix Games tried to throw in some strategic naval elements to represent the boardgame, it just had the “crappy movie tie-in” tag from the start menu.

The gameplay was incredibly rushed, graphics were sub-standard, and the game didn’t even do a good job to capture the atmosphere of the movie. What are the worst licensed games you had the unfortunate luck of playing? Let us know in the comments section below:

And if you’re looking for some good games to play, Raru has some great prices on console and PC titles, as well as hardware, and peripherals, so head over and check out Raru.co.za. Free Delivery to all Main Centers for Orders above R299.