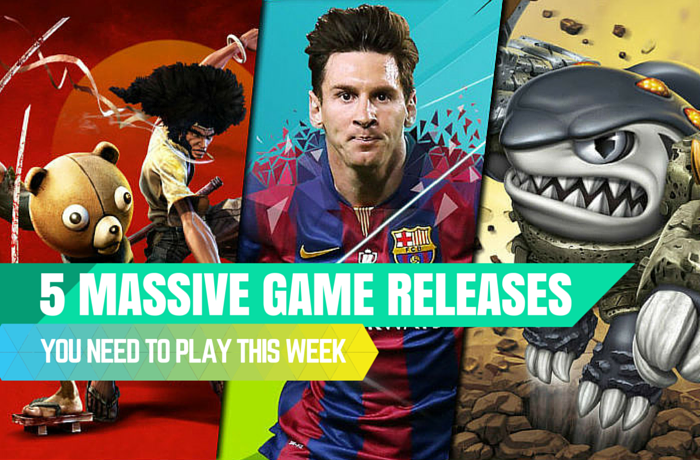 Looking for a new game this week? We take a look at what’s hitting SA store shelves and digital outlets.

The abundance of video game releases continues this week as we steamroll closer to the always-busy fourth quarter of the year. It seems like big games are launching every week nowadays, with titles like Metal Gear Solid V and Forza Motorsport 6 filling people’s time (and helping lighten their wallets).

This week, with major releases for fans of just about every genre, from sports games to horror adventures.

Here are our picks for the biggest games launching the week:

No one expects major overhauls to the core gameplay of an annual sports franchise like FIFA; you generally get a couple of new features, plus updated rosters and schedules, which usually pleases fans for another year.

FIFA 16 features all those little gameplay tweaks, but the biggest addition is the inclusion of 12 Women’s National Teams. It’s been an all-male series to date, so that ought to shake things up a bit. It also has 78 stadiums (50 of which are real), loads of players, and new weather conditions for the latest generation of consoles.

Skylanders SuperChargers is one of the many recent video games that works with real-life toy figures you can upload into the game to use as playable characters. SuperChargers is a basic action platformer that has you whacking bad guys as you run and jump through colorful levels. The big twist in this instalment is the addition of vehicles. In fact, you’ll spend about half the game in cars, boats, and aircraft as you fight the good fight against the nefarious villain Kaos. This could be the biggest change the series has gone through since it began in 2011, so check it out if that’s your thing.

Afro Samurai 2: Revenge of Kuma is the action-packed sequel to the original story and picks up where the first game left off. To set the stage, Afro Samurai is based on one of this century’s coolest manga/hip hop universe incarnations that has a rabid fan base who is passionate about the characters and story. If you like manga, anime, and hip hop, you’ll love this.

It’s a 3rd-person combat on steroids, with a bit of Tomb Raider type exploration in it, and a whole lot of hack and slash fighting with visceral, bloody finishing moves. It’s not for the faint of heart.

This time, the story follows the path of Kuma, a cybernetically enhanced killing machine with a bear’s head who was actually once Afro’s closest childhood friend called Jino.

What do you get when you combine the modern-day sport of football with a bloodthirsty fantasy world? You get Blood Bowl, a brutal sport that pits races like orcs, elves, humans, dwarfs, and more against each other on the gridiron.

The series started as a tabletop game made by Games Workshop, the company behind Warhammer, so Blood Bowl 2 plays more like a turn-based strategy game than a traditional sports title. The matches are full of violence, thanks to all manner of weapons being allowed on the field, but it’s played in a humorous fashion to keep things light and airy. Check this game out if you’re looking for something a little different from traditional sports games.

Developer Frictional Games knows a thing or two about crafting a heart-thumping horror experience. It’s the team responsible for the Amnesia series on PC, after all. The company’s latest work of creep-tactic unease is Soma, a game that brings the horror to an underwater research facility, where you’re stuck among evil beings who want to kill you.

The thing that stands out about Frictional’s games is that you never play as a soldier or anyone who’s capable of taking on the horrific creatures that are hunting you down. In fact, there’s usually not even an attack button. These games are about being careful and trying to avoid the Lovecraftian monsters that want to detach your head from your body. Soma might not be for everyone, but if you like a good fright, it ought to deliver.