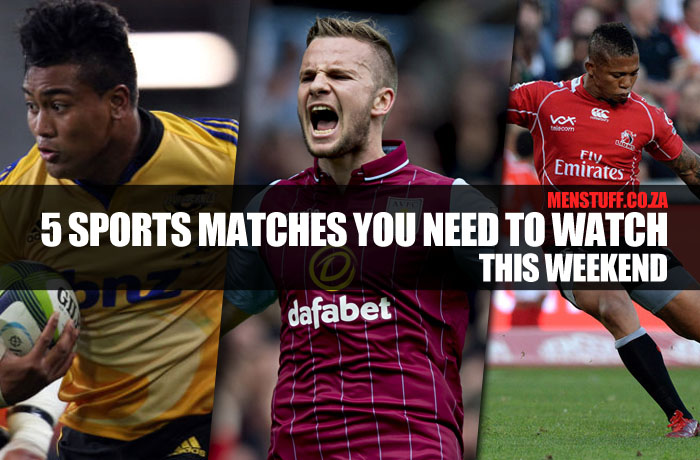 MenStuff looks at the sports fixtures coming our way this weekend and selects five key matches you need to witness.

Grab your snacks, get your couch ready, and prepare for a weekend full of massive sporting clashes, and MenStuff is giving you the lowdown on which encounters you have to catch:

The underachieving Crusaders play host to the log-leading Hurricanes this weekend, and things aren’t looking too positive for the seven-time champions, as the Crusaders have named an under strength team due to injuries and have made seven changes to the site that lost to the Waratahs last week. The Hurricanes have brought back many of their big guns, including Conrad Smith, and will be firing on all cylinders to lock in their position for the play-offs.

This weekend’s showdown between the Chiefs and Highlanders is shaping as a potential playoff preview. With the Hurricanes seemingly safe atop the Super Rugby standings, the battle for second in the New Zealand conference holds great intrigue in the remaining three rounds, and with the Chiefs and Highlanders both sitting inside Super Rugby’s top five in points scored, the onus will be on attack in what will be perfect conditions for running rugby.

After keeping Aston Villa in the Premier League, coach Tim Sherwood shifts his focus to lifting the FA Cup in Saturday’s final against Arsenal. Sherwood believes all the pressure will be on Arsenal when he leads his Aston Villa side out at Wembley in the FA Cup final. Arsenal lifted the trophy last season with a 3-2 win over Hull City after extra time, and will start Saturday’s game as favourites having finished third in the Premier League. Villa, by contrast, finished one place above the relegation zone, with Sherwood’s appointment in February proving crucial to the club securing survival.

On Saturday, the Lions host the defending champions in Waratahs at Ellis Park. In terms of form the Lions are having their best year in over a decade. They are still in with a chance of making the play offs and have played 14 matches so far and won 8. The Waratahs are the current champions and have played 13 matches and won 9, and the prospect of a home semi-final is now so real they can touch it, so expect the Australians to be throwing everything they have at the spirited Lions.

England’s surprise win at Lord’s has given the team some much-needed confidence. It was was a major shock to everybody that they turned things around in such dramatic fashion having slipped well behind in the first Test. Suddenly people are giving the England cricket team a second glance, but it won’t be as easy second time around, as New Zealand will be looking to hit back hard at Leeds cricket ground.

Which big sporting events are you most excited for? Let us know in the comments section below…