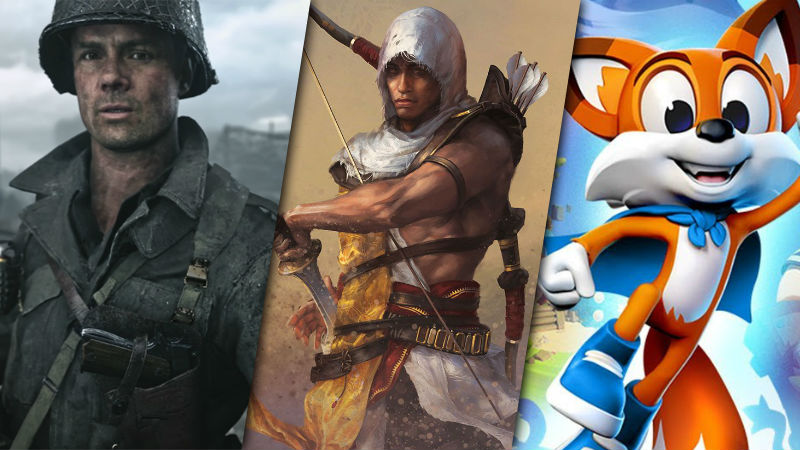 From big-name sequels to smaller indie titles, there have been some massively exciting and highly-anticipated games hitting shelves recently. We’ve got our hands on the biggest new games and put them through the ringer to give you everything you need to know about the current releases in one handy feature:

What is it? The newest instalment in the long-running Call of Duty FPS franchise, taking gamers back to the series’ origins with a World War II setting.

Is it any good? While some of the recent futuristic, tech-infused entries into the series have felt a bit ‘all over the place’, Call of Duty: World War II is one of the most focused games in the CoD lineup, and it’s largely due to the familiar WWII territory the franchise has tread before. You get a more grounded story, centring on fewer characters and bigger moments; and the gunplay (while it has always been enjoyable) finally has that new-age weight and feel to it. There’s also a focus on relying on your squad for health and ammo, which is great. In typical Call of Duty fashion, there are some truly fantastic set-pieces that highlight the scale of the second World War, along with some more sombre moments.

As for the multiplayer, it’s as brutal, frantic, and fast as ever, and long-time players will feel right at home. The new maps and weapons will throw a hint of uncertainty with players who’ve become overly familiar with the gadgets and boosts from previous titles, but it’s a refreshing return to the basics of what made CoD’s online component great. Some new modes, such as the new War game type, also add some dynamic objective-based goals to multiplayer games — great for those who aren’t too focused on chasing KD ratios. The franchise needed a shake-up, and going back to the beginning has definitely taken Call of Duty into the future.

What is it? The latest instalment in the Assassin’s Creed franchise that takes you back to the story’s origins (hence the name) with a distinctively different setting that’s been needed in AC games.

Is it any good? Assassin’s Creed: Origins is the most ‘different’ AC game in years. Aside from the new setting, the biggest changes to the game come to its combat. The control scheme has been revamped from the face-buttons to a shoulder button layout, allowing players to time light and heavy-attacks with a huge variety of weapons. There are also ‘lite’ RPG elements, with XP being awarded to players for quests and completed objectives. This does add more immersion to the game, but does become a bit frustrating when you encounter a higher-level enemy and have to scour for side-quests to rank up before taking him on. The focus then shifts from skill-based combat to a bit of a grind, in order to have the abilities to showcase your skills. But although it prolongs the experience, it doesn’t hamper it.

Another welcome change is to the flow of the game. The character of Bayek moves quicker, more organically, and doesn’t carry that awkward weight to him that other Assassins have had. It’s as if Ubisoft have now nailed the feeling of doing ambitious parkour in glorious ancient settings.

Speaking of, while the architecture of Egypt isn’t as strikingly artistic, like that of renaissance Italy or 19th century Paris, Origins is arguably the most beautiful Assassin’s Creed game to date, largely due to the meticulous attention to detail and gorgeous desert vistas.

Available on: Xbox One, PC

What is it? A light-hearted 3D platformer inspired by the yesteryear titles such as Mario 64, Croc, and Crash Bandicoot.

Is it any good? Super Lucky’s Tale has a lot going in its favour. A likeable mascot-like character, striking visuals, and a fun, tongue-in-cheek tone. It even has the make-or-break mechanics for platformers in tow: responsive controls. What it does lack though is challenge. This is a game made for a somewhat younger audience, but, with that said, it would appeal to older fans of the genre. We’ve become accustomed to the punishing difficulty (we’re looking at you Crash Bandicoot N.Sane Trilogy), but sometimes a casual frolic through a colourful world, jumping on things and collecting coins while avoiding the odd baddy is a welcome distraction from the chaos many other games on the market bring.

We’ve got a soft-spot for Super Lucky’s Tale, and if you’re looking for something to scratch that Banjo-Kazooie-shaped itch, it’s worth checking out (and is very well-priced).

What is it? Everybody’s Golf is the Rocket League of golf games, bringing a fun and colourful spin of the simulation-style version of the sport.

Is it any good? The golf genre in gaming has been going through the rough in recent times, with most recent PGA titles not hitting the pin as intended; so an arcade, casual interpretations of the game is what we were needing to get us back into the swing of things (pun score: 3/3). What’s great about Everybody’s Golf is that it’s accessible enough to pick up for a quick game with friends, but has a surprising amount of depth (despite its zany appearance) that will keep those interested sinking hundreds of hours into the game. Thankfully, at the base of it all, is a solid game with enjoyable and fair golf mechanics that purists will subtly nod to.

What is it? The Frozen Wilds is an expansion for Guerrilla Games’ brilliant Horizon: Zero Dawn, which opens a whole new area to explore, along with a new story for players to take on.

Is it any good? The excellent Horizon: Zero Dawn didn’t really need a story expansion, but it got one anyway, and it’s brilliant. Adding over 15 hours of more apocalyptic robo-killing, The story takes a detour into the plight of one of the land’s more obscure tribes, and while it doesn’t necessarily evolve the overarching Horizon world further, it’s a compelling mystery that deserves to be solved. Along with then new side-story, the expansion also introduces a handful of brutal and sneaky new robot foes, who, admittedly, are incredibly difficult. The challenge at hand insinuates that you have already finished the main story in Horizon: Zero Dawn, so keep that in mind when purchasing.

Will you be picking up any of the above titles? Let us know by tweeting @MenStuffZA and commenting below.

7 Awesome PS4 Games Worth Checking Out

Shadow of War Review — Lord of the Things

10 New Games & Whether You Should Buy Them or Not

Xbox One X: How Much Does it Cost & When is it Available in SA?