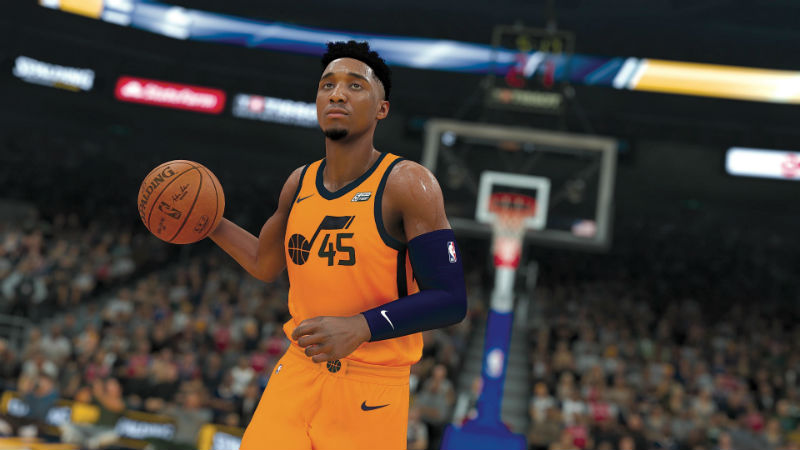 Have 2K Sports delivered the slam-dunk fans have been expecting? Here’s our review of NBA 2K20.

The NBA 2K series has set a very high bar (hoop?) for itself, delivering more and more impressive basketball sims each and every year, so much so that it even knocked EA’s competing franchise off the court entirely. That said, the 2K series has seen some criticism from its hardcore fanbase as of late; but does NBA 2K20 rectify the squeaks and court-marks for a better game this year round?

Many will tout the likes of FIFA or PES to deliver the most photo-realistic looking graphics in the sports genre, but there’s no competing with 2K20‘s uncanny visual standard. Watching the replays and getting up-close cutscenes, it’s easily confusable with a real basketball game, as tiny details like believable facial movements, glistening sweat, or even the texture on the ball selling the presentation. Much like the FIFA series, one can start to expect that massive leaps of improvements begin to dwindle year on year, especially after the solid gameplay of 2K19. However, 2K20 has received a boost which includes a bit of a weighty upgrade to the Motion Engine, improved ball handling, dribbling, better reactions on defence, and enhanced rim protection. It’s clear that the focus of this time around was to get the ‘feel’ of movement right, and the slight enhancements are noticeable and appreciated.

A big addition to the core offering is the inclusion of the WNBA, featuring accurate hairstyles, face scans, new players, new teams, new play styles, player strengths and weaknesses, new animations, as well as specific AI, playbooks, and defensive schemes for every WNBA team. Allowing players to select on of the 12 WNBA teams and take them through the 2019 season will offer a bit of extra longevity for those familiar with or want to explore the WNBA league. The Story Mode, which features the voice talent of Idris Elba, is well-written, enjoyable, and brings an expected dose of drama to the on-court action. It’s the best mode to lure in fans who aren’t die-hard basketball nuts, but who need a hook to experience the great gameplay that’s on offer with 2K20.

Fans of the series will be glad to see MyLeague Mode back, but there’s very little new here. The same systems and interface is used, and while it’s still where you’ll probably be spending most your time, it doesn’t feel (or look) any different. While the foundational offering of NBA 2K20 is just so darn good, it can’t be ignored that the game is littered with microtransaction opportunities being thrust onto you. They’re obviously optional, but you’ll often find yourself working through pop-ups and menus regularly trying to get away from them. The emphasis on these pay-to-gain mechanics is relatively bizarre for a game that prides itself on stellar gameplay.

Even with the obnoxious microtransaction elements, 2K’s beloved NBA franchise returns for its annual stint on the court with a solid landing. Newcomers might find it slightly overwhelming, but once you pass the initial learning curve, there’s a lot of fun to be had. But, with that said, if you own 2K19, you could maybe wait another year before picking up the latest instalment; but for hardcore fans, there are a lot of new tweaks to pleased with.

You can buy your copy of NBA 2K20 on PriceCheck.

X-Gamer Supplements for Gamers Launch in SA, Here’s Our Verdict
Hands-On with the Call of Duty: Modern Warfare Beta
To Top
wpDiscuz