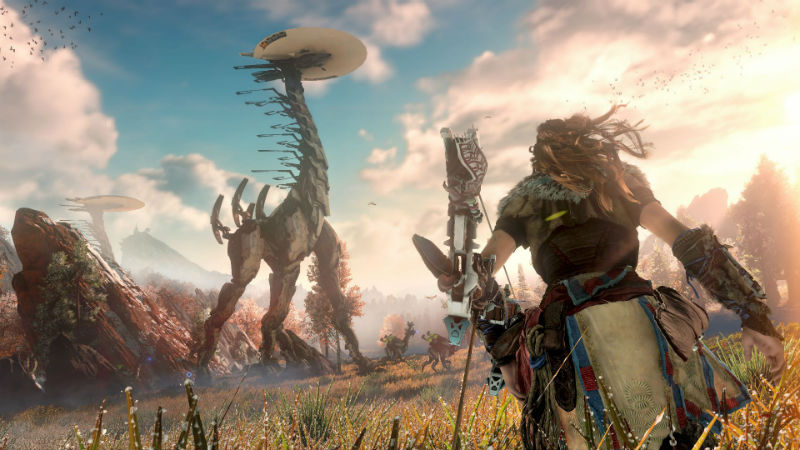 What are critics saying after going hands-on with one of 2017’s biggest games?

Horizon: Zero Dawn, from the team behind the highly-acclaimed Killzone franchise, is setting up to be one of the biggest games coming in 2017. Some international journos have had the chance to go hands-on with the action-adventure title, and we’ve rounded up some of their initial impressions to see if Horizon: Zero Dawn should be on your radar or not.

“Horizon: Zero Dawn is shaping up to be the best and most exciting PlayStation 4 exclusive. Guerrilla Games has really stepped up from their linear FPS days to create an open-world full of life, mystery and intrigue. The robotic animals provide a reason to explore this vast world and the story looks set to delight. Horizon: Zero Dawn definitely borrows some ideas from other open-world games, but it combines them to create something special.”

“After playing several hours of Horizon Zero Dawn, I was already hooked. Whether I was doing something as mundane as farming for parts to upgrade my items, or completing a mission, there wasn’t a moment where I felt like the experience was dragging. The post-post-apocalyptic setting, as well as the journey Aloy will set out on to find her identity is something i can’t wait to experience once the game comes out.” “I can’t say definitively whether Horizon is a good game just yet. But after playing it for a few hours, I can say one thing wholeheartedly: I’m more excited than ever to play Horizon when it comes out.”

“I spent about 5 hours playing Horizon: Zero Dawn in an extended preview of the game’s early stages and I’m thrilled to say that so far, the hype looks justified. The extra polish [due to the delay] is obvious and may end up being a blessing for gamers, who’ve been rightfully critical of other recent game launches riddled with bugs and glitches.”

“Horizon Zero Dawn looks to be a game where players will be able to lose themselves for dozens of hours: foraging for scrap and upgrading their gear, hunting down dozens of types of machines, and embarking on no shortage of quests and errands. While much of Horizon will appear familiar, if not downright rote, from a gameplay perspective, its beauty and its mysteries will help it stand out among its open-world ancestors.”

“Guerrilla Games’ Horizon Zero Dawn is a step in a new direction for the Killzone developer. The shift from a long-standing first-person shooter focus to an open-world action game isn’t without its hiccups, but it’s also a risk that seems to pay off – especially in combat.”

“Horizon is a game that, for now, feels more Far Cry than The Witcher; more exciting for the experiences you create yourself or that drift along your path, than a world full of set stories to discover and affect.”

“Based on what I saw at the preview, I’m committing to more time with Aloy and her world. Horizon paints its concepts in broad strokes, but I think the end result is still an image that’s striking to behold.”