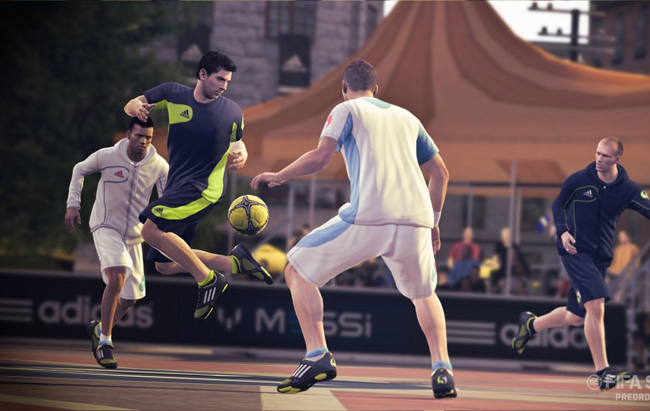 FIFA Street returns with more style than ever before.

The FIFA Street series has had an interesting existence since its first release in 2005. The spin-off series, which focuses on trickery, flair and style, was well-received and while never becoming a strong force, had a decent following.

The FIFA Street series seemed to slip a bit with its third iteration, as the concept of style seemed to overtake that of fair gameplay mechanics, and FIFA Street 3 lost the series’ touch with it’s over-the-top antics and hyper-stylised gameplay.

The series now returns to the Xbox 360 and PS3, and aptly named simply FIFA Street, the franchise is looking to find its feet once again.

A good start this time around is that the game is actually running off the FIFA 12 engine, which sees this year’s Impact Engine also make its way into the back alleys and streets. The game therefore runs very smoothly and emulates the free-flowing organic nature of the ball and players, as opposed to the magnetic passing seen in previous instalments.

There is an incredible amount of ball control thanks to an intuitive control scheme that allows the player to move the ball as they see fit. When a player is in possession of the ball, skills and tricks are executed with the right analogue stick, although if the left trigger is held, your player stops and then moves the ball around his stationary position. If a player lunges for the ball, pull it behind you; if they’re coming from the left, pull the ball to the right. It works very well and is incredibly responsive, allowing you to hold onto the ball for the extra second before making a precise pass or intricate skill move.

The depth of these moves and controls are unprecedented for the series, giving players the chance to interact with a pass in a number of ways. The ability to slide, lift or seamlessly pass the ball (with a lot of style) adds a great amount of options to the attacking game of a side.

Graphically, the game is not up to the detail of FIFA 12 itself, but the colours, style and interface surpass it in terms of eye-candy without a doubt. That’s not to say the game isn’t visually impressive – the models are gorgeous, the animations are fluid and the stadiums and locations are bright and vivid. It just doesn’t have that spit and polish on the finer details; but the breath-taking moves more than make up for it.

FIFA Street is still undoubtedly going to go through some tweaks here and there before its final release, but as it stands the game looks great and is incredibly fun to play. It’s a refreshing step-up from a franchise that was losing some serious momentum.

Expect a full review around the game’s release.