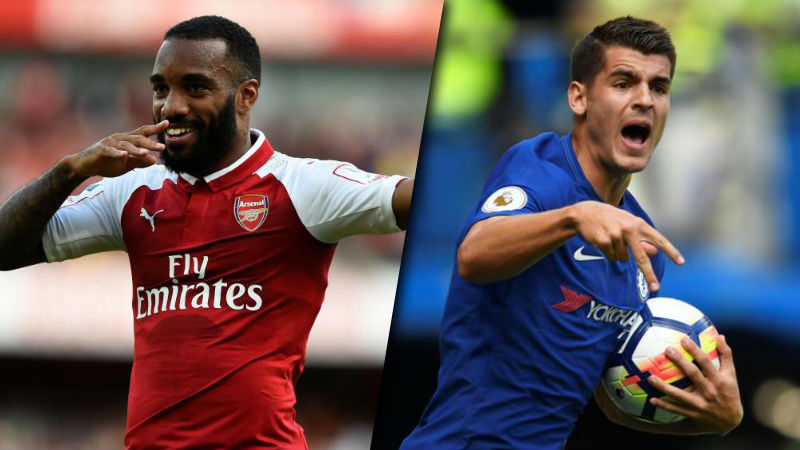 This weekend features a big battle for bragging rights in London as Chelsea host Arsenal at Stamford Bridge in the Premier League. Both went out and spent small fortunes on new strikers, with Alvaro Morata joining Chelsea from Real Madrid and Alexandre Lacazette joining Arsenal from Lyon – but which striker has been adapting to the Premier League the best?

We’re going to take a look at their key stats to see which of the two front men is most likely to help their team get three points this weekend.

Based on these stats alone, it appears as though Morata is adapting better, and there are a few reasons why that may be true. The first is that he’s more physically adapted to playing the role of a centre-forward, or a #9, than Lacazette is. At 1.88m tall, compared to Lacazette’s height of 1.75m, Morata is able to compete in the air better, which is a common hallmark of successful Premier League forwards. More important than their individual abilities, though, are their teammate’s contributions that allow them to attempt as many shots on target as possible – and in this regard, Morata far exceeds Lacazette’s output. Now, assuming that their teams are creating the same number of chances both centre-forwards should be getting similar shots on target – but that isn’t the case. According to Squawka’s football stats compilation, Arsenal’s team has created 59 chances so far this season, while Chelsea have only created 51. The distance between Morata’s stats of 3.5 shots per game versus Lacazette’s much lower 1.5 suggests that Lacazette either isn’t working hard enough to get into good positions, or he’s still adapting to the requests made of him by Arsene Wenger. Whatever the reason is, Morata’s stats suggest he’s far more likely to get on the end of good chances, and probably more likely to score.

Based just on this head to head comparison, a Chelsea victory seems highly likely – but can Arsenal and Lacazette shock their London rivals at Stamford Bridge?