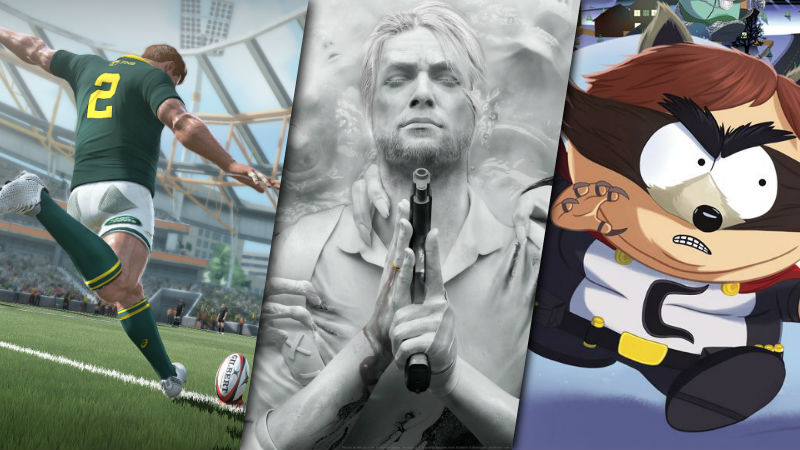 We review the biggest games out there and whether you should be dedicating some time to them this month!

From big-name sequels to smaller indie titles, there have been some massively exciting and highly-anticipated games hitting shelves recently. We’ve got our hands on the biggest new games and put them through the ringer to give you everything you need to know about the current releases in one handy feature:

What is it? The latest entry into Big Ben Interactive’s Rugby franchise, following on from Rugby 15 and Rugby World Cup 2015, which were, admittedly, dreadful.

Is it any good? Well, Rugby 18 is a huge improvement on the very shaky foundation left by its predecessors. Keep in mind, this is a new developer on the project, so a lot of fresh ideas went into the game. The timing-based rucking, tackling, and set-piece mechanics are all great, but it seems like Eko Software put too much focus on those elements and not enough in the general running and passing gameplay, which is the real crux of the enjoyment of rugby. The positioning and player AI still seems off, and even though it’s a playable (and sometimes fun) interpretation of the sport, it’s still bogged down by frustrating bugs and silly design choices. It’s got the look, ambition, and licenses — it unfortunately just lacks the core gameplay that captures the feel of rugby.

South Park: The Fractured But Whole

What is it? The sequel to Obsidian’s surprisingly brilliant South Park: The Stick of Truth RPG, although, those infamous children from Colorado explore their superhero infatuation this time around.

Is it any good? It’s very good — combining the audacious humour and tongue-in-cheek social commentary of South Park with robust RPG mechanics, and allowing players to create their own superhero and guide him through through his encounters with familiar and new characters from the TV show. The turn-based, grid combat will be familiar to RPG veterans, but there’s a handy quick-time event mechanic when being attacked that lets you deflect a bit of damage. It adds a bit of speed and excitement to the otherwise tactical gameplay. Don’t be fooled by its cartoonish milieu, this is a solid RPG for genre-lovers and South Park fans.

What is it? GT Sport continues the long-running racing franchise, but injects an edge of sport (as the name would suggest), focusing on the more performance-based vehicles that keep the world in awe.

Is it any good? Well, it’s a Gran Turismo game, so it has a level of unprecedented polish before its even off the starting block. Cars are spectacularly details, tracks are gorgeously realised, and the driving feels as solid and simulated as you’d expect from the series. That said, it has its bumpy roads. There’s a huge emphasis on time trials and challenges, rather than bumper to bumper racing. While it may be taking a ‘faster’ approach than its predecessors, this is still very much a driving experience game, rather than a racing game.

What is it? The sequel to arguably the scariest games of the modern generation. The Evil Within is Shinji Mikami’s baby project since he stopped working on the Resident Evil franchise, so it’s brutal, frightening, and action-packed all at the same time.

Is it any good? The Evil Within was a surprise hit when it released in 2014, and the follow-up expands on the somewhat linear, survival-horror formula by throwing players into bigger environments and trickier enemies, while refining the stuff controls from the first game. The story, as is with most of Mikami’s games, is a bit all over the place, but does manage to come together when things start wrapping up. For fans of Resident Evil 4, Dead Space or The Last of Us, this is a great addition to your nightmare fuel.

What is it? A deep, tactical game that combines turn-based strategy war, real-time tactical combat, and the fantasy lore of Games Workshop’s Warhammer universe.

Is it any good? The good thing for newcomers is that you don’t need to be well-versed in Warhammer lore to enjoy the game. Total War: Warhammer II helps you along as you get going, providing a crash-course for how the faction-specific mechanics of previous Total War games worked, but peppering them all with some Warhammer magic. Each race is vastly different, allowing for a lot of experimentation and enjoyment to be had, which helps the monumentally-scaled battles always stay fresh. If you’re a fan of StarCraft, Lord of the Rings: Battle for Middle-earth, or the Command & Conquer series (we’re still waiting on another good C&C sequel), check out Total War: Warhammer II.

What game are you most keen to play? Let us know by tweeting @MenStuffZA and commenting below.

7 Awesome PS4 Games Worth Checking Out

Shadow of War Review — Lord of the Things

10 New Games & Whether You Should Buy Them or Not

Xbox One X: How Much Does it Cost & When is it Available in SA?