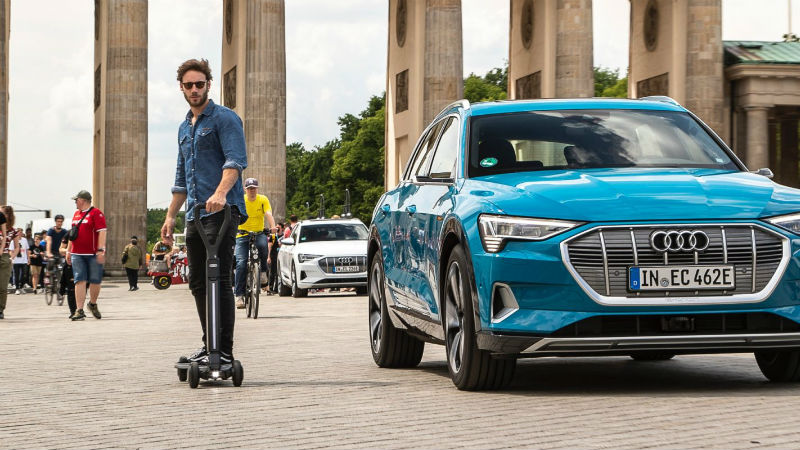 Electric skateboards and scooters have been popping up more frequently in recent years (we’ve reviewed a few), offering commuters in close-proximity cities and towns viable travel options instead of a traditional car. It’s obviously a bourgeoning market, as German car company Audi has recently unveiled their innovation in the market space.

Audi’s e-tron Scooter isn’t exactly a normal e-scooter or electric skateboard though, and is something in-between the two, combining the advantages of both modes of transport. It weighs in at twelve-kilograms, so it’s got a noticeable weight to it, but this e-scooter can be folded up and conveniently stored in the back of a car or pulled like a trolley, making it a lot easier to move around when not in use. Although riders only have to keep one hand on the handlebar with a twist-grip accelerator, they control the scooter’s moveable axles like a skateboard with their feet by shifting their weight.

The scooter has a range of 20 kilometres, which is impressive by today’s standards, which is helped by a recuperation of kinetic energy when the e-scooter brakes. There is also a hydraulic foot brake as additional safety too, along with a headlight, daytime running light, rear light and brake light. A Bluetooth interface allows the rider to make adjustments to the e-scooter’s characteristics and provides protection against theft.

There are also plans for the e-scooter to be charged in the boot of Audi’s e-tron models through a dedicated socket.