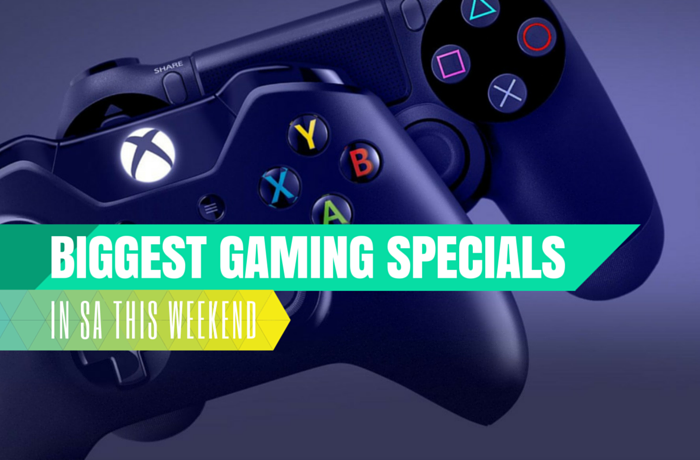 We round up the best deals for South African gamers this weekend from the biggest online and physical retailers.

If the wealth of gaming titles and/or console bundles being released this quarter has got you (and more importantly, your wallet) down, don’t fret. We’ve wrapped up all the biggest gaming deals for your convenience (you can pay us in high-fives later).

Here’s the best of the best this week:

Makro has an Xbox One console bundle on special this weekend. The bundle includes the 500GB console, two controllers, and two games: Gears of War Ultimate Edition and Call of Duty: Ghosts, all for R5,999. Musica is also promoting its Xbox 360 and PS3 titles, offering two selected games from the Xbox 360 or PS3 library for R500. Some of the standout titles include Far Cry 3, Crysis 2, Hitman: Absolution, Just Cause 2, Spec Ops: The Line, Sleeping Dogs, and Max Payne 3. BT Games has an Xbox 360 and game bundle on special this weekend. It includes the new-shape Xbox 360 with the bigger 500GB hardrive, one controller, and Battlefield 4, all for R2,999.90.

Musica has specials on two different PS4 console bundles. The first special (which is available this weekend) includes a 500GB console, one DualShock 4 controller, and two games (Driveclub, The Order: 1886), all for R6,199.95.

Music is running some promotions on selected gaming titles this weekend, and some high-profile games have been separated into three different pricing categories (as seen below). local online retailer Raru has launched a new gaming sale to help you save a few bucks.

The clearance sale is available while stocks last, and there are some great games on offer for all systems. Here are some of the most notable deals we picked out:

Check out the full list of games on special here.